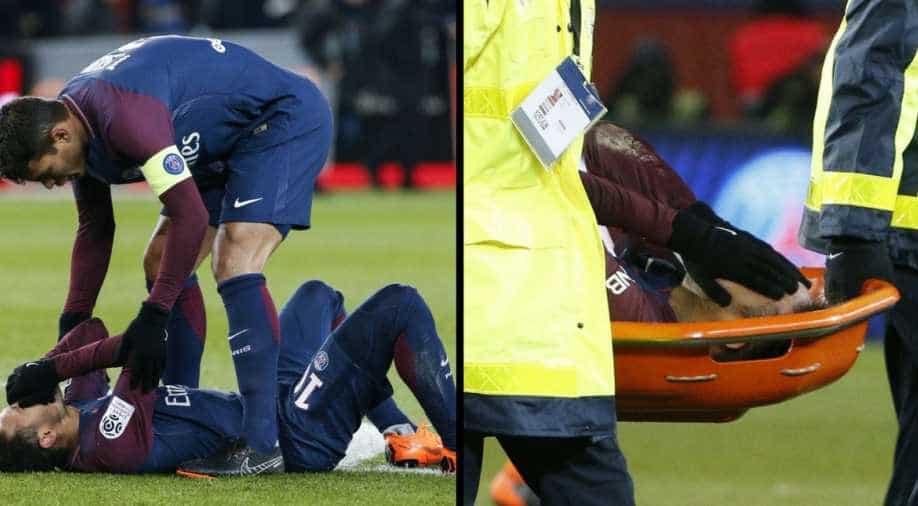 Neymar was stretchered off the field Sunday during PSG's 3-0 win over Marseille. Photograph:( Twitter )

Paris Saint-Germain star Neymar suffered a sprained ankle and a fractured metatarsal when he was stretchered off in Sunday's win over Marseille, the Ligue 1 leaders announced on Monday.

The Brazilian, who signed for PSG in a world-record move from Barcelona last year, is now a serious injury doubt for the Champions League last-16 second leg against Real Madrid at the Parc des Princes on March 6.

PSG trail in the tie after a 3-1 first-leg defeat in Spain, with their hopes of a maiden Champions League title taking a further body blow with the confirmation of Neymar's injury, although they didn't specify how long the 26-year-old would be out of action.

"Additional examinations performed today (ultrasound and CT) confirmed an external sprain of the right ankle, but also an associated fissure of the fifth metatarsal," PSG said in a short statement.

The chances of Neymar returning to fitness in time to face the reigning European champions now appear extremely slim.

He is all but certain to miss Wednesday's French Cup quarter-final against Marseille and the weekend's Ligue 1 visit to Troyes, with the Real clash just three days later.

Metatarsal injuries usually take weeks, if not months to recover from.

Just last year, Neymar's international team-mate Gabriel Jesus was out of action for two months after breaking a metatarsal with Manchester City and has struggled with further injuries since.

Former England stars David Beckham and Wayne Rooney spent six weeks on the sidelines with metatarsal injuries in the past, with both still arguably being rushed back too soon for the 2002 and 2006 World Cups respectively.

Brazil fans will also be keeping a close eye on Neymar's fitness, especially after he missed their 2014 World Cup thrashing by Germany with the injury.

PSG, who lead the French top flight by a massive 14 points, also said that Brazilian centre-back Marquinhos had picked up a leg muscle problem.