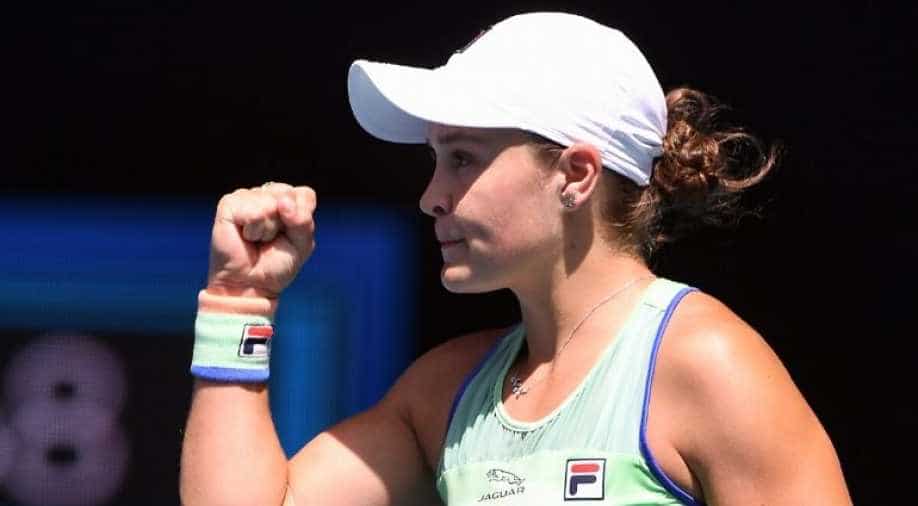 Australia's Ashleigh Barty celebrates after a victory against Czech Republic's Petra Kvitova during their women's singles quarter-final match on day nine of the Australian Open tennis tournament in Melbourne on January 28, 2020. Photograph:( AFP )

The top seed plays 14th-seeded American Sofia Kenin in the last four after surviving a tough first set to defeat Petra Kvitova 7-6 (8/6), 6-2 in the quarter-finals.

Ashleigh Barty said Tuesday that she prefers the quiet life but there is no chance of that after Australia's world number one reached the semi-finals of her home Grand Slam for the first time.

Top seed @ashbarty posts her best #AusOpen result to date, reaching the semifinals with a 7-6(6) 6-2 win over Petra Kvitova.

She's the first Aussie woman to reach this stage since Wendy Turnbull in 1984 🇦🇺#AO2020 pic.twitter.com/gPQfhEuzLC

The top seed plays 14th-seeded American Sofia Kenin in the last four after surviving a tough first set to defeat Petra Kvitova 7-6 (8/6), 6-2 in the quarter-finals.

There is intense pressure on the 23-year-old Barty, the last remaining Australian in the tournament, to deliver the first homegrown women's champion since Chris O'Neil in 1978.

She is the face of the Australian Open and her picture is on billboards all over Melbourne.

But Barty said: "I'd prefer to just be sitting at home just living my quiet little life.

"I mean, no offence, but not having to chat to you guys every day would be pretty good," she told reporters, smiling.

"I feel like I have nothing to say, I'm talking in circles a little bit."

But Barty said having the focus on her in Melbourne was inevitable and "a part of the journey that I hate it and I love it".

Beating the Czech seventh seed Kvitova was revenge for Barty, who was beaten by the two-time Wimbledon champion at the same stage last year.

But the down-to-earth Australian is a better player than 12 months ago, winning the French Open last year and hitting the top of the rankings for the first time.

Kvitova, 29, who suffered a severe injury to her left playing hand in a knife attack at her home in 2016, and Barty went toe-to-toe in a crucial seventh game of the first set.

In a game stretching to nearly 10 minutes, Barty fought off five break points to hold serve at Rod Laver Arena, to roars of approval.

In a tense encounter, they went to the tie-break, but it was Kvitova who blinked, shanking a forehand long to give Barty the set in 69 high-quality minutes.

Barty, who once gave up tennis to play professional cricket, clenched her fist. Kvitova tossed her racquet into air.

Barty pulled away in the second set as Kvitova wilted in the Melbourne sun.

The Australian sealed the deal with her trademark minimum fuss, booking her spot in the last four with an ace.

The draw has opened up for Barty after six of the top 10 women's seeds were beaten in the third round, among them reigning champion Naomi Osaka and history-chasing Serena Williams.

Barty and the 21-year-old Kenin have played five times before, the Australian winning four of them.

But she is wary of an aggressive opponent who is on the rise and set to at least match her career-high of 12 in the world next week.

"She's an exceptional competitor, loves to put herself out there, test herself on the biggest stage," said Barty.

"She has a great knack of controlling the court from the centre of the court and being that first-strike player.

"It's going to be important for me to try and nullify that if I can."