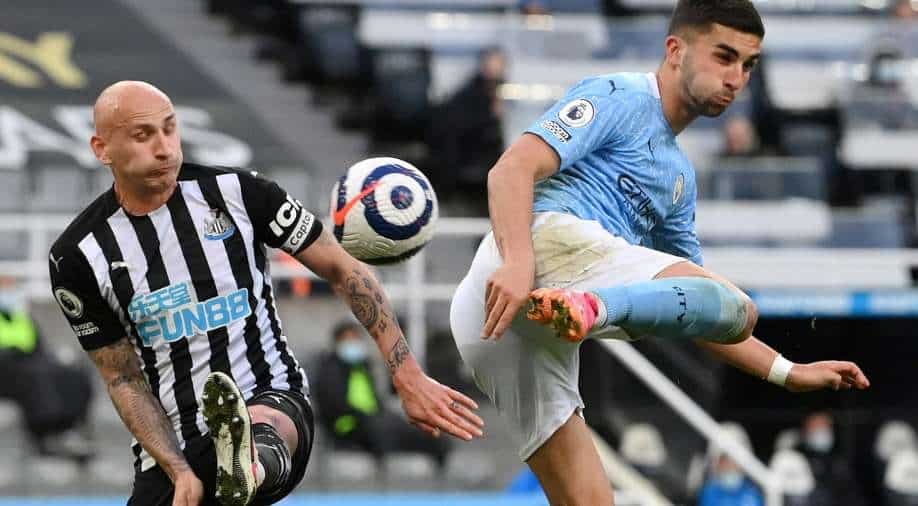 "He is so young and clinical. He is a guy brought as a winger but maybe we have to think as a striker."

With Pep Guardiola's City having already bagged the title and Newcastle safe, there was nothing riding on the fixture but it served up some rich entertainment with Spaniard Torres especially enjoying himself at St James' Park.

"Incredible numbers and goals in his first season in the Premier League," Guardiola said of the 21-year-old signed from Valencia for 20 million pounds ($28.20 million) last August.

"He is so young and clinical. He is a guy brought as a winger but maybe we have to think as a striker."

Twice City had to come from a goal down as they extended the gap at the top of the table to 13 points.

Carson's first action was to pick the ball out of the back of his net after Emil Krafth found space to head home Jonjo Shelvey's cross in the 25th minute.

Joao Cancelo's deflected drive levelled it up in the 39th minute and Torres put City ahead with a superbly improvised flick to direct Ilkay Guendogan's cross into the net.

But Newcastle were level in first-half stoppage time when Joelinton thumped a penalty past Carson after a complex VAR decision. Joelinton was clearly taken down by Nathan Ake in the box but VAR was required to decide whether Allan Saint-Maximin had been offside in the build-up.

It was proving a busy night for Carson and he faced another penalty just past the hour when Kyle Walker barged over Joe Willock in the area.

Carson saved Willock's effort but the Arsenal loanee turned in the rebound.

But City were in no mood to offer any gifts and were level again within two minutes as Torres converted a cross by Raheem Sterling on the stretch.

Two minutes later he completed his hat-trick when he showed great balance to volley home a rebound after Cancelo struck the woodwork with a fierce drive from outside the area.

Torres now has 13 goals in all competitions for City this season and while Carson's contribution has been far less, Guardiola was full of praise for his stand-in keeper, too.

"We are incredibly happy for him. He is an important player for us. He is a real leader and today was an exceptional day to let him play," the Spaniard said.