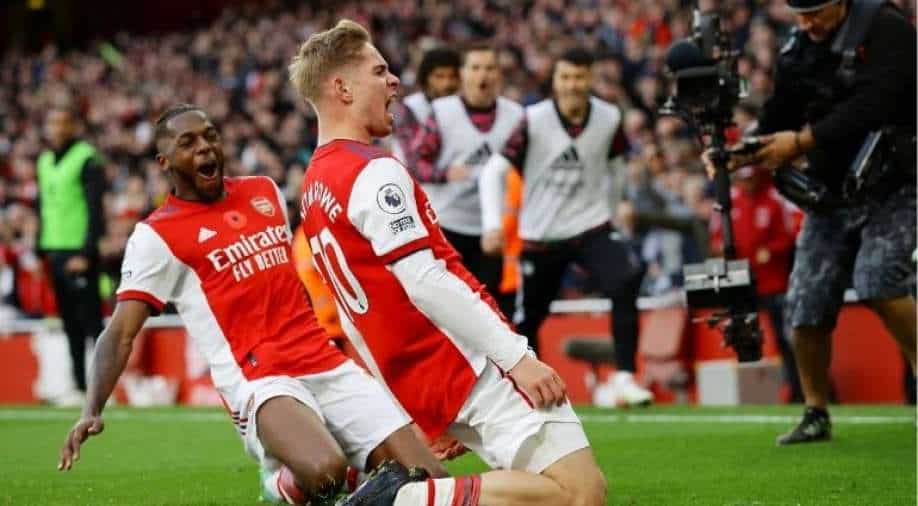 Arsenal are now unbeaten in 10 games in all competitions.

Mikel Arteta celebrated his 100th game as Arsenal manager with a 1-0 victory against 10-man Watford on Sunday as the resurgent Gunners climbed to fifth in the Premier League.

Emile Smith Rowe broke the deadlock in the second half after an inspired performance from Watford goalkeeper Ben Foster had frustrated the hosts, with Juraj Kucka dismissed late on at the Emirates Stadium.

The three points mean Arsenal, unbeaten in 10 games in all competitions, leapfrog Brighton and Manchester United.

The Gunners last season failed to qualify for Europe for the first time in 26 years but they are now unbeaten in 10 games in all competitions.

The home side thought they had taken a seventh-minute lead when Bukayo Saka tucked away a loose ball in the area after Foster parried Alexandre Lacazette's chip.

But the goal was disallowed for offside following a VAR check.

Arsenal were awarded a penalty when former Tottenham defender Danny Rose rashly thrust his arm into Lacazette's head in the 34th minute.

Foster continued to keep Arsenal at bay, making another sharp save with his foot to deny Gabriel's firm header from a corner shortly before half-time.

But Smith Rowe broke the deadlock in the 56th minute, scoring his third goal in as many Premier League games when his strike from the edge of the area ricocheted off Craig Cathcart and into the net.

Aaron Ramsdale had a nervy moment late on when he rushed from his goal and failed to clear the ball but Josh King hit the side-netting from a tight angle.

Kucka was sent off in the 89th minute after receiving a second yellow card for a late challenge on Nuno Tavares, while Foster denied Lokonga in added time.