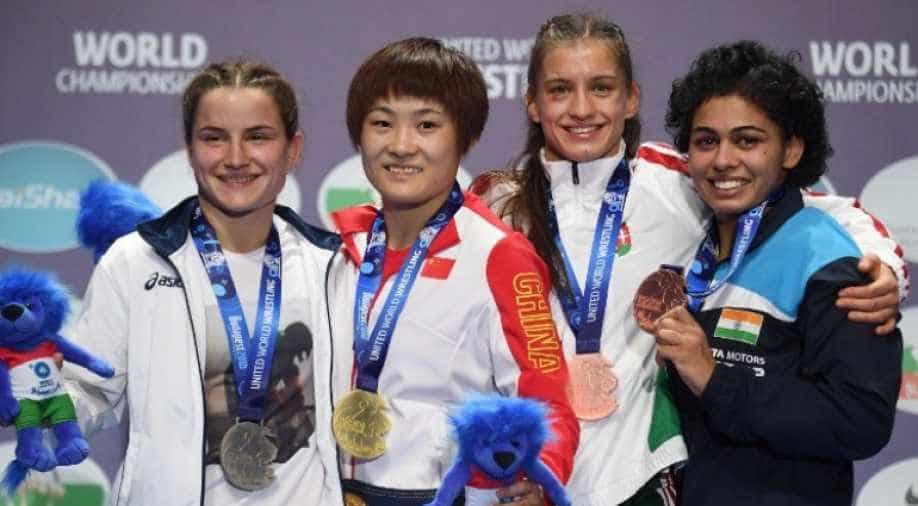 One of the two wrestlers in a medal contention, the 24-year-old Pooja executed a four-point throw in each of the two periods in the 57kg contest to deliver the best performance of her career.

Pooja Dhanda became only the fourth Indian woman grappler to win a medal at the World Championship, grabbing a bronze with a stunning 10-7 win over the 2017 European champion Grace Jacob Bullen.

One of the two wrestlers in a medal contention, the 24-year-old Pooja executed a four-point throw in each of the two periods in the 57kg contest to deliver the best performance of her career.

It is India's second medal at the ongoing championship after Bajrang Punia's silver medal performance in the men's freestyle 65kg category.

It is second big medal for Pooja this season, having won a silver the Commonwealth Games in Gold Coast.

Only Alka Tomar (2006), Geeta (2012) and Babita Phogat (2012) have won bronze medals for India at the Worlds before Pooja's memorable medal victory.

She opened up a 4-1 lead with a throw, which she found on counter-attack. She consolidated it with a roll and took a 6-1 lead after the end of first period.

After conceding a point for a step out, Pooja Stunned the Norwegian with another four-point throw, to zoom to a 10-2 lead.

Grace reduced the gap with a takedown and a couple of push outs to put pressure on the Indian, who was cautioned twice. She somehow managed to avoid a third caution, holding off to lead.

She had earlier erased a three-point deficit to win her repechage round 8-3 against Alyona Kolesnik from Azerbaijan.

Before Pooja's bout Ritu Phogat lost her bronze medal bouts and none of the four Greco Roman grapplers could win even a single match.

Ritu had a chance to emulate her elders sister -- Geeta and Babita -- to win a Worlds medal but she lost the 50kg bronze play-off 5-10 to Ukraine's Oksana Livach.

Coming from behind, she had beaten Romania's Emilia Alina Vuc in the repechage but the Ukrainian proved too strong for her.

Rio Olympic bronze medallist Sakshi Malik yet again failed to reach the medal round at a big-ticket event, losing the repechage round 2-3 to Hungary's Marianna Sastin. Sakshi had a 2-1 lead but failed to defend it for last seven seconds, playing too defensive.

The Greco Roman competition began today but none of the four wrestlers could win a match.