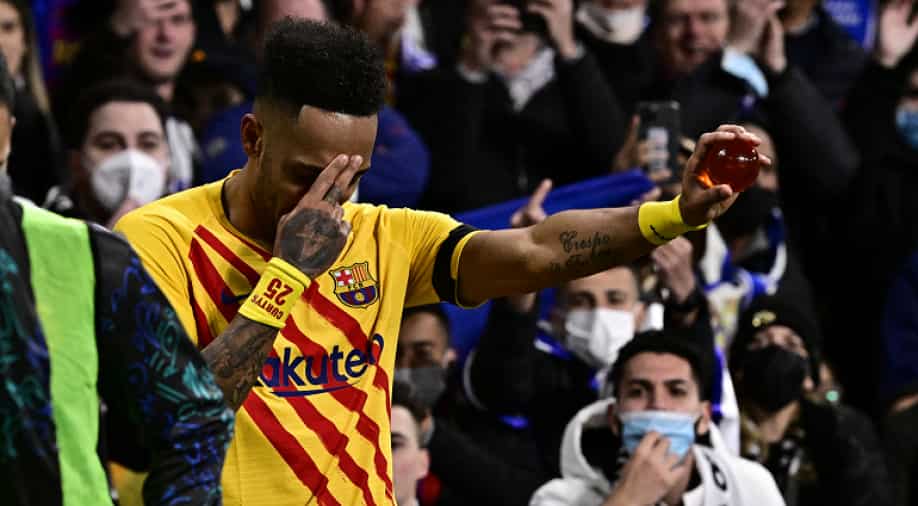 Pierre-Emerick Aubameyang scored twice as FC Barcelona thrashed Real Madrid 4-0 in the El Clasico. Aubameyang has scripted a new El Clasico record with his twin goals in the game.

Pierre-Emerick Aubameyang has set La Liga on fire ever since his arrival at FC Barcelona on a free transfer from Arsenal. The Gabonese striker has been sensational in front of the goal and has been producing impressive performances for the Spanish giants on a regular basis.

Aubameyang continued his brilliant run in the first El Clasico of the year against Real Madrid on Sunday at the Santiago Bernabeu. He netted a stunning brace as FC Barcelona thrashed their arch-rivals 4-0 to register an emphatic win in the La Liga. Aubameyang scripted a unique El Clasico record with his brace against Real Madrid.

Aubameyang opened the scoring for Barcelona in the 29th minute after he scored a brilliant header from a cross from French winger Ousmane Dembele, who also seems to be returning to form for the Spanish giants. The Gabonese striker then went on to complete his brace in the 51st minute to extend Barcelona's lead to 4-0 and wrap up a dominant win for Xavi's side.

Aubameyang x Dembele combo has picked off from where they stopped at Dortmund #ElClasico pic.twitter.com/XRND41rY0J

Aubameyang was replaced by Dutch forward Memphis Depay in the 71st minute after steering Xavi's men to an emphatic win in the Clasico. Barcelona are currently third on the La Liga points table after their cruising victory against Real Madrid while Carlo Ancelotti's men are on the top of the table with 66 points from 29 matches.

Real Madrid, who were missing their talismanic striker Karim Benzema and defender Ferland Mendy in the El Clasico, will be hoping to bounce back when they take on Celta Vigo in the La Liga on Saturday this week.