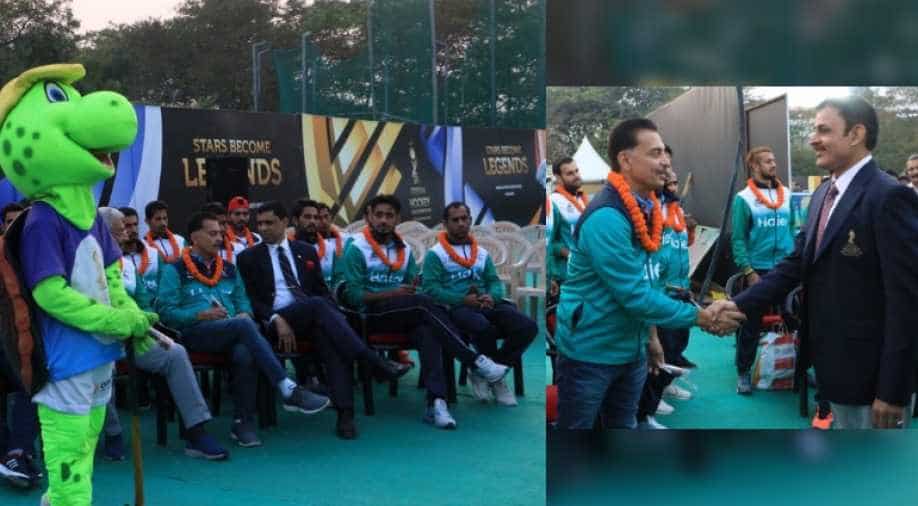 The village set up in an area of 18,000 square meters has been designed to keep visitors engaged in various activities.

Pakistan hockey team visited the Fan Village in Kalinga Stadium, which has been designed to keep visitors engaged in various activities, to meet and interact with their fans.

Pakistan is placed with Netherlands, Germany and Malaysia in Pool D of 2018 of Men's Hockey World Cup.

In the presence of captain Hassan Sardar and Coach Tauqeer Dar, the entire team was felicitated by Dr Rajendra Prasad Sharma, who is the Director General of Police, Odisha.

The village set up in an area of 18,000 square meters has been designed to keep visitors engaged in various activities.

"We wanted to make the Hockey Men`s World Cup a truly memorable experience for the fans who have turned out in great numbers to cheer for their favourite teams and create an electrifying atmosphere in the stadium that motivates the players to perform their best," said Elena Norman, CEO, Hockey India.

Fans were up for a big treat when @PHFOfficial contingent arrived at the OHMWC Bhubaneswar 2018 Fan Village on the evening of 4th December. They were given a warm welcome with heavy drum beats.#IndiaKaGame #HWC2018 #DilHockey pic.twitter.com/OkQMGjNUdz

"While the spectators come and watch the exhilarating hockey action on the pitch, we wanted them to have an opportunity to meet their favourite stars up-close and the participating teams too were forthcoming to support the initiative," she said.

Four-time champions Pakistan produced a lion-hearted performance before going down 0-1 to Olympic bronze medallist Germany in their opening Pool D match of the men's hockey World Cup here on Saturday.

Next, they will meet Malaysia on December 5.