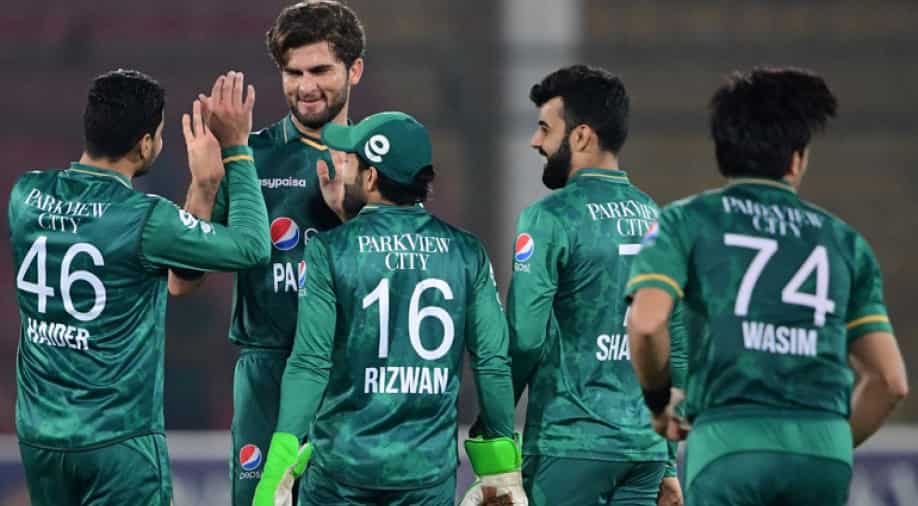 Pakistan have created a new world record with their 63-run win against West Indies. Photograph:( AFP )

Babar Azam-led Pakistan created a new world record after thrashing West Indies by 63 runs in the first T20I of the ongoing series on Tuesday.

Pakistan got off to a winning start in the onging three-match series against West Indies at home. Babar Azam & Co. thrashed West Indies by 63 runs in the series-opener at the National Stadium in Karachi to take 1-0 lead and set a new world record in T20Is. Pakistan became the first team to register as many as 18 wins in T20Is in a calendar year, bettering their own record of 17 wins from 2018.

It was a dominant performance from the Pakistan batters, who took the Windies bowlers to the cleaners and set up a huge total of 200 runs on the board. Opener Mohammad Rizwan slammed a brilliant 78 off 52 balls while Haider Ali scored a quickfire 68 off just 39 deliveries. After dominating the proceedings with the bat, Pakistan also did well with the ball to bundle out the visitors cheaply and register a massive win.

Chasing a big target of 201 runs, West Indies were skittled out for just 137 runs in 19 overs as Mohammad Wasim picked up a four-wicket haul while Shadab Khan finished with three wickets. The win marked Pakistan's 18th T20I victory in 2021 as they broke their own record from 2018. Pakistan have the record of most wins in a calendar year to their name in T20Is.

The Men in Green have been a force to reckon with in T20Is in recent years and performed exceptionally well in the T20 World Cup 2021. Pakistan had thumped India by ten wickets in their first Super 12 encounter at the T20 World Cup 2021 to bring an end to their losing streak against their arch-rivals in World Cup matches before hammering New Zealand by eight wickets.

They remained unbeaten in the Super 12 stage of the T20 World Cup 2021 but had to bow out of the competition after losing in the semi-final against eventual champions Australia.

Pakistan have carried their T20 World Cup form in the ongoing home series against West Indies with a comprehensive victory in the series-opener in Karachi. Pakistan will be hoping to win the second game which is scheduled to take place on Tuesday to clinch the three-match series.

Women's Ashes Test: Australia reach 327 for 7 after end of play on Day 1