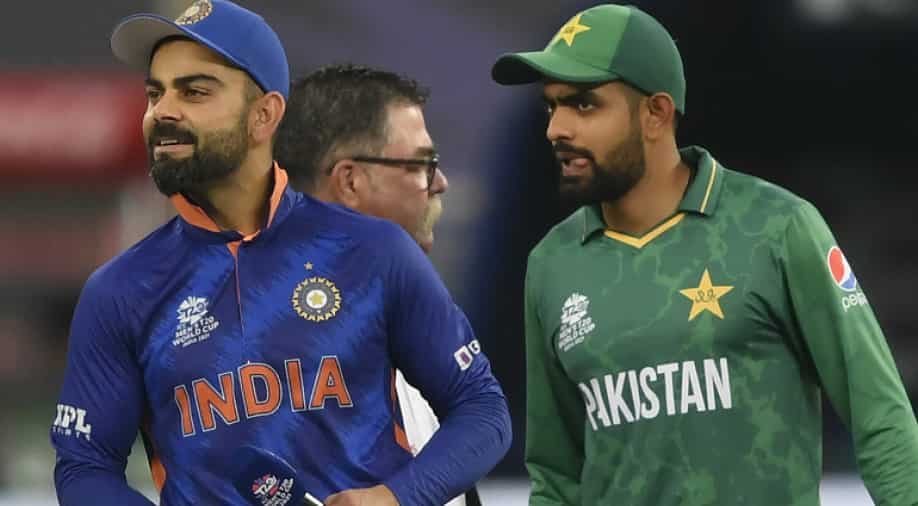 Pakistan captain Babar Azam responded to a question by a reporter about his chat with Virat Kohli during the T20 World Cup 2021.

Pakistan captain Babar Azam was recently stumped by a reporter's question during a press conference ahead of his team's upcoming three-match T20I series against West Indies at home. Ahead of the first T20I between the two sides, Babar was asked about his chat with former India T20I skipper Virat Kohli during the T20 World Cup 2021 in UAE. Kohli and Babar were spotted talking on the field ahead of the start of the India-Pakistan clash at the T20 World Cup.

Pakistan had produced a dominant performance against arch-rivals India to beat them by ten wickets in the Super 12 encounter and get off to a winning start in the tournament. Pakistan had defeated India by ten wickets to bring an end to their losing streak against the Men in Blue. Kohli had congratulated Babar and his batting partner Mohammad Rizwan for their unbeaten match-winning stand in the game.

During the press conference on Sunday, the reporter asked Babar if he can share the details of his chat with Kohli during the T20 World Cup. He also asked the Pakistan captain to share his thoughts on Kohli getting replaced by Rohit Sharma as India's ODI captain ahead of their tour of South Africa.

"Babar, there have been a lot of questions regarding the series. But there was a video which surfaced during the T20 World Cup, where you and Virat Kohli were spotted chatting. So what did you guys talk about? What did you tell him, or what did he tell you? He is going through a tough time since he has been removed as captain. What did you speak to him about during the World Cup?" - the reporter asked.

Pakistan media manager intervened and asked the reporter not to come up with questions not related to the upcoming series between Pakistan and West Indies. However, the reporter insisted it was not a controversial question and that Babar can answer if he wants to. The Pakistan captain then responded to the reporter and told him he cannot reveal the details of his chat with Kohli.

"Of course, we had a discussion. But why would I reveal it in front of everyone," said the Pakistan captain responding to the reporter.

The meeting between India and Pakistan at the T20 World Cup 2021 was the first instance when Babar came up against Kohli as the captain of Pakistan. He managed to pull one over the former India ODI and T20I skipper, who is no more in charge of the white-balls teams and will lead only in Tests.

Babar, meanwhile, is leading Pakistan across all three formats and will be hopeful of inspiring the team to a series win against West Indies at home.