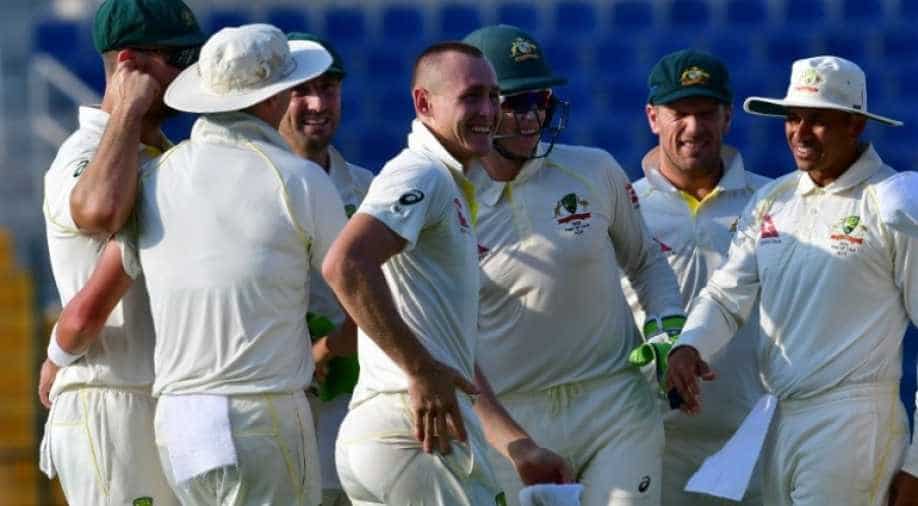 Debutant opener Fakhar Zaman and skipper Sarfraz Ahmed missed hundreds by six runs each but still revived Pakistan on the first day of the second and final Test in Abu Dhabi on Tuesday.

Fakhar and Sarfraz scored 94 each and helped Pakistan recover from 57-5 to a total of 282 after winning the toss and electing to bat on a slow turning pitch at Sheikh Zayed Stadium.

Before the close Pakistan grabbed two wickets, including that of Usman Khawaja for three, as Australia finished on 20-2, with Aaron Finch on 13 and nightwatchman Peter Siddle dismissed off the last ball of the day for four.

Fast bowler Mohammad Abbas had Khawaja -- who scored a fighting 141 to lead Australia's fightback for a draw in the first Test in Dubai last week -- caught behind for his 50th Test wicket in 10 Tests.

Abbas became joint second-fastest Pakistani to the milestone of 50 wickets with Waqar Younis, Mohammad Asif and Shabbir Ahmed. The record is held by team-mate Yasir Shah who completed 50 wickets in nine matches.

Abbas then trapped Siddle to finish on 9-2.

Sarfraz was frustrated to miss his fourth Test hundred but happy with the fightback.

"Yes, its disappointing to miss a hundred but I am happy the way we revived the innings and then got two wickets, including that of Khawaja, so for me it is an even position," said Sarfraz who was hit on the left forearm by a rising delivery from Mitchell Starc.

"At the moment I am feeling discomfort and if there is swelling tommorrow then we can summon reserve wicketkeeper as per the new rules," said Sarfraz.

Earlier Zaman and Sarfraz found form with fighting and innings-reviving knocks, taking the attack to the Australian bowlers after spinner Nathan Lyon had rocked Pakistan in the morning, reaching lunch with figures of 4-12.

Zaman hit eight boundaries and a six in his enterprising knock as he and Sarfraz added 147 runs. Zaman was trapped leg-before by leg-spinner Marnus Labuschagne for 94, becoming the fourth Pakistan batsmen to be dismissed in the 90s on his debut.

Sarfraz then holed out to Labuschagne, who finished with 3-45. Sarfraz hit seven boundaries in his 94.

In the first session, pace bowler Starc provided Australia with an early breakthrough in the third over when Mohammad Hafeez fell to a freakish catch at short leg by Labuschagne for four.

Lyon then took four wickets in six balls at the total of 57.

He dismissed Azhar Ali, caught and bowled for 15 in his fourth over, and next ball had Haris Sohail caught close to the wicket for nought.

In his next over, Lyon had Asad Shafiq caught at short leg and two balls later bowled Babar Azam, who had come dancing down the wicket.

Australia kept the same eleven from the drawn first Test in Dubai while Pakistan replaced injured Imam-ul-Haq and Wahab Riaz with Zaman and Mir Hamza.