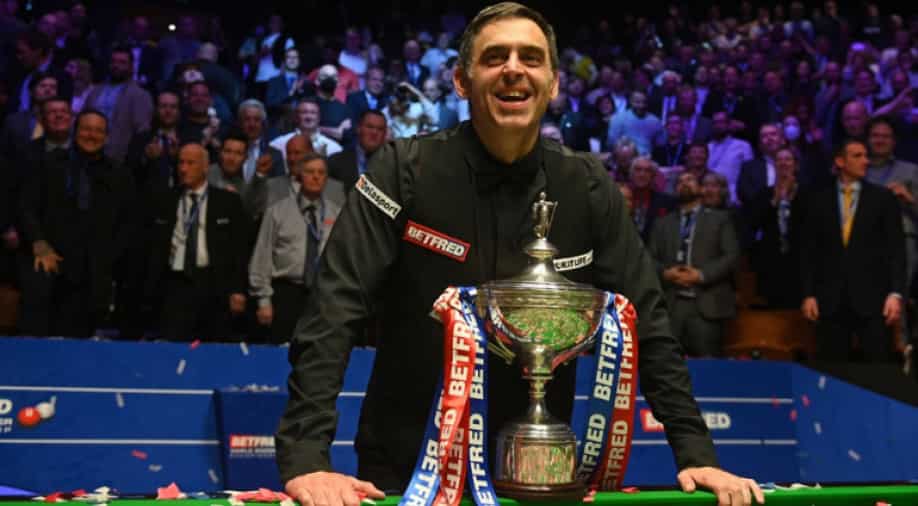 England's Ronnie O'Sullivan poses with the trophy after his victory over England's Judd Trump in the World Championship Snooker final at The Crucible in Sheffield, England Photograph:( AFP )

Ronnie O'Sullivan equalled Stephen Hendry's modern-day record of seven snooker World Championship titles by stopping a Judd Trump rally in its tracks with an 18-13 win in the final on Monday.

The showpiece match at Sheffield's Crucible Theatre was in the balance when the evening session started, with O'Sullivan leading 14-11 in the best of 35-frame contest after 2019 world champion Trump had bounced back from 12-5 down overnight.

But having lost his first session of the tournament, O'Sullivan, at 46, the oldest World Championship finalist since mentor Ray Reardon in 1982, surged ahead before sealing victory with a break of 85.

A sporting O'Sullivan, nicknamed the 'Rocket' for his speed round the table and widely regarded as the most naturally talented player in snooker history, paid tribute to Trump by saying his opponent was already an "all-time great" because of his attacking approach.

He then played down his achievement in matching Hendry's tally of world titles by telling the BBC: "I've never bothered about records -- when you get them, it's kind of nice, I've never performed well if going for that, I've just tried to enjoy my game.

"The Crucible brings out the worst in me -- it's probably not the best idea but we'll probably go again next year!"

Monday's triumph came 21 years after O'Sullivan first won the world title with Hendry, now a television commentator, saying: "He's taken the game to new levels, he really has. He's got it all."

'Best player of all time'

It was a point endorsed by Trump, who said of O'Sullivan: "It's been a pleasure to share a table with him. It's an amazing achievement and he's the best player of all time."

The 32-year-old left-hander added, modestly: "I was just glad to make a match out of it."

Trump's hopes of completing what would have been an astounding comeback were effectively ended within minutes of the start of the concluding session in this all-English clash as O'Sullivan rattled in breaks of 82 and 88 in a matter of minutes to move within two frames of victory.

Trump, however, stopped the rot with a break of 64, although O'Sullivan was still 16-12 ahead.

But the next frame saw O'Sullivan produce a break of 75 to leave him just one frame away from glory following the mid-session interval.

Trump was first in come the next frame and had the better of a safety exchange before an excellent break of 109 -- which broke the previous Crucible tournament record of 108 -- prolonged the contest.

But he 'jawed' an attempted pot in the next and O'Sullivan, after a brief safety exchange, made light of a tough red along the cushion to spark a match-clinching contribution.

Sunday's play had been notable for a row between O'Sullivan and referee Olivier Marteel -- an unusual flare-up in the normally sedate world of snooker.

Marteel accused O'Sullivan of making an obscene gesture after failing to get out of a snooker in the eighth frame.

That led O'Sullivan to challenge Marteel by telling the Belgian official he "saw nothing".

O'Sullivan, who had been 5-1 up, lost the next two frames and at the end of the session left the arena without offering the traditional handshake to the referee.

The World Snooker Tour subsequently said O'Sullivan had been issued with a formal warning by Marteel.

O'Sullivan, however, tried to quell any controversy by offering a fist bump to Marteel at the start of Sunday's evening session, which he then dominated to establish a seven-frame lead that left Trump with a mountain to climb.