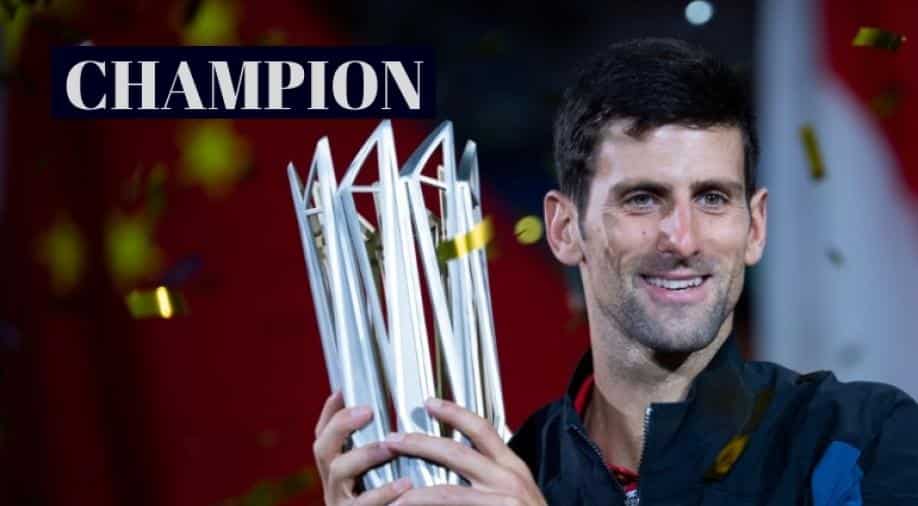 Novak Djokovic of Serbia poses with his trophy. Photograph:( AFP )

Djokovic will surpass Federer as world number two when the next edition of the ATP rankings are released on Monday.

Djokovic will surpass Roger Federer as world number two when the next edition of the ATP rankings are released on Monday.

On his way to the finals, Djokovic had defeated Germany's Alexander Zverev in straight sets.

After winning the title, Djokovic interacted with media and said, "It's phenomenal. Not many holes in the game, especially this week, everything worked perfectly. This has been one of the best serving weeks I've ever had."

"It's phenomenal. Not many holes in the game, especially this week, everything worked perfectly. This has been one of the best serving weeks I've ever had." - @DjokerNole on his perfect week at the #RolexSHMasters. Now owns 32 Masters 1000 titles, just one behind @RafaelNadal pic.twitter.com/CeZlWI7aff

And he's done it! @DjokerNole is your 2018 Rolex Shanghai Masters champion for the fourth time, defeating @borna_coric 6-3, 6-4. #RolexSHMasters @jpmorgan pic.twitter.com/O5uAQi2qsl

Halfway to a record-setting 4th #RolexSHMasters title, a focused @DjokerNole takes the first set 6-3 over @borna_coric. Can the youngster create some kind of momentum in the 2nd? No opportunities so far... pic.twitter.com/UHtsTZoBbJ

#Coric gets his right thigh strapping tightened during the changeover. The Croat is ready to give it all he's got in these final games of the 2nd! Can he manage a break here? #RolexSHMasters pic.twitter.com/TlbOFF09fv

The 31-year-old Serb broke Coric's serve in the sixth game and made a series of forays to the net as he consolidated his lead.

The Serb grabbed the opening set with a hold to love, having dropped just four points on his serve overall.

Coric looked far from his best in his first ATP Masters final as he dropped his serve in the opening game of the second set.

The 21-year-old saved three match points to hold serve in the ninth game before Djokovic served out to clinch his fourth title of the season.

Djokovic has returned to his brutal best this season with Grand Slam wins at Wimbledon and the US Open.

The 14-times Grand Slam champion extended his winning streak to 18 matches as he continues to chase Rafa Nadal's world number one crown, with the Spaniard skipping the Asian swing to recover from a knee injury.