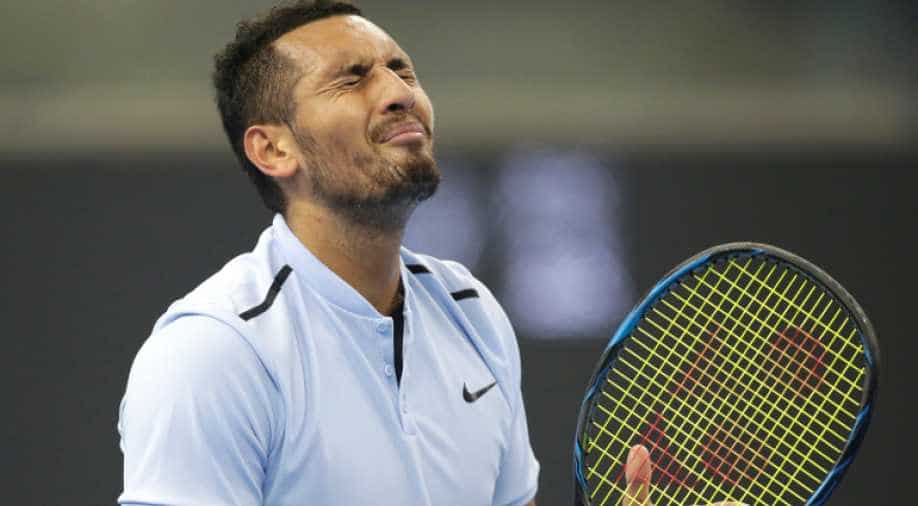 ATP: Kyrgios?had been punished for "unsportsmanlike conduct", saying he had failed to complete a medical visit to explain his actions. Photograph:( Reuters )

Kyrgios became embroiled in an expletive-laden rant at umpire Fergus Murphy in his first-round win against Spaniard Roberto Carballes Baena, at one point accusing a line judge of 'rigging' his match

Australia's Nick Kyrgios has been fined a total of $17,500 for unsportsmanlike conduct by the ATP after a series of outbursts at officials at the Queen's Club championships on Thursday.

The 23-year-old became embroiled in an expletive-laden rant at umpire Fergus Murphy in his first-round win against Spaniard Roberto Carballes Baena, at one point accusing a line judge of "rigging" his match.

In his second round match later in the day against Canadian Felix Auger-Aliassime, which he lost in three sets, Kyrgios was given another warning by umpire James Keothavong for smashing a ball out of the ground after a call went against him.

Kyrgios, who is never far from controversy wherever he plays, also rowed with fans and a courtside photographer and appeared to be going through the motions in the final games.

"... your hat looks ridiculous also, it's not even sunny" - @NickKyrgios pic.twitter.com/CQnHQZfzp5

Afterwards, Kyrgios described the performance of the match officials as "a joke" and "horrendous".

"I think it's ridiculous. Like, why not have another umpire ready to come in if that guy has a terrible day?" Kyrgios said. "I don't understand. I have to pay the fines for it.

"The calls are horrendous, but I get fined and he gets nothing. It's like a black star. I don't know what happens. It's rubbish," said Kyrgios.