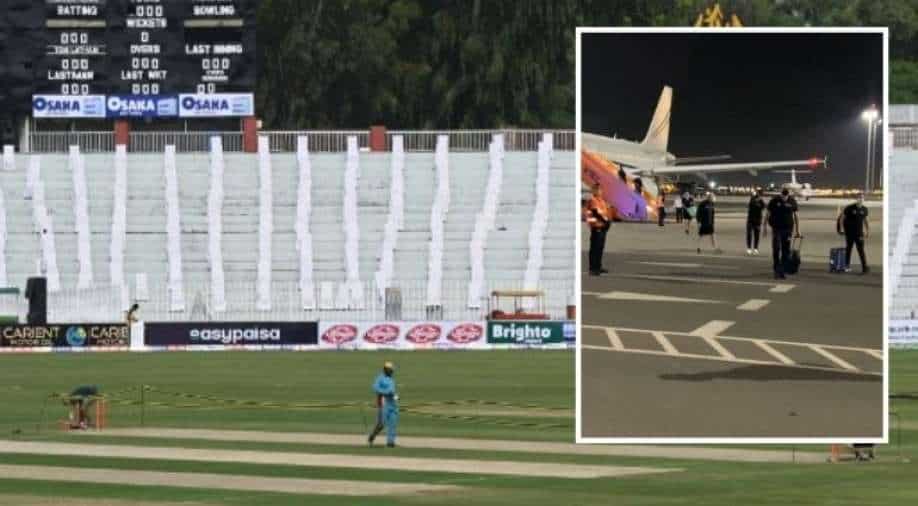 New Zealand had abandoned the limited-overs tour on the day it was supposed to begin in Rawalpindi citing a government security alert.

After abandoning the Pakistan tour, the New Zealand cricket team arrived in Dubai after leaving Islamabad on a charter flight on September 18 as New Zealand was warned of a "specific, credible threat" against its team.

Pakistan and New Zealand were supposed to play on September 17 first of three ODIs in Rawalpindi, before moving to Lahore for a five-match T20 series.

New Zealand had abandoned the limited-overs tour on the day it was supposed to begin in Rawalpindi citing a government security alert.

Now, the official New Zealand cricket website has informed that the contingent of 34 players and support staff are in Dubai and undergoing their 24-hour period of self-isolation.

Some cricketers will fly back home and the rest will remain in the UAE and join New Zealand's T20 World Cup squad, ahead of that tournament commencing on October 17.

The BLACKCAPS have arrived in Dubai after leaving Islamabad on a charter flight last night (New Zealand time).

The players and support staff are now settling into their Dubai hotel and undergoing a 24-hour self-isolation.

ALSO READ | As Pakistan's image takes a nosedive, what's next for the cricket-crazy nation under PM Imran Khan?

He said, "We appreciate this has been a terribly difficult time for the PCB and wish to pass on our sincere thanks to chief executive Wasim Khan and his team for their professionalism and care. What I can say is that we were advised this was a specific and credible threat against the team."

"Everything changed on Friday. The advice changed, the threat level changed and, as a consequence, we took the only responsible course of action possible. Unfortunately, given the advice we'd received, there was no way we could stay in the country," White added.

Top teams have largely shunned Pakistan following an attack by Islamist militants on the Sri Lanka team bus in Lahore in 2009 that killed six policemen and two civilians.

However, the South Asian country has been putting efforts to stage international tournaments at home. Pakistan have only hosted South Africa, Sri Lanka, Bangladesh and Zimbabwe since the 2009 attacks.

Even Prime Minister Imran Khan's telephone discussion with New Zealand counterpart Jacinda Ardern could not save the tour and prevent a major blow to Pakistan's hopes of hosting top international teams.

Prime Minister Ardern said NZC "made the right decision" to pull out of the tour. "You will understand why we are not in a position to give further information as to the nature of the intelligence, other than to say, it was a direct threat, and it was a credible threat," she told reporters on Sunday.

In the aftermath, PCB chairman Ramiz Raja called New Zealand's decision of cancelling the tour "an unfortunate scenario" but was also confident that Pakistan know how to overcome such crises. He also suggested the Pakistan team to channelise "frustration and anger" towards their performance ahead of the T20 World Cup.