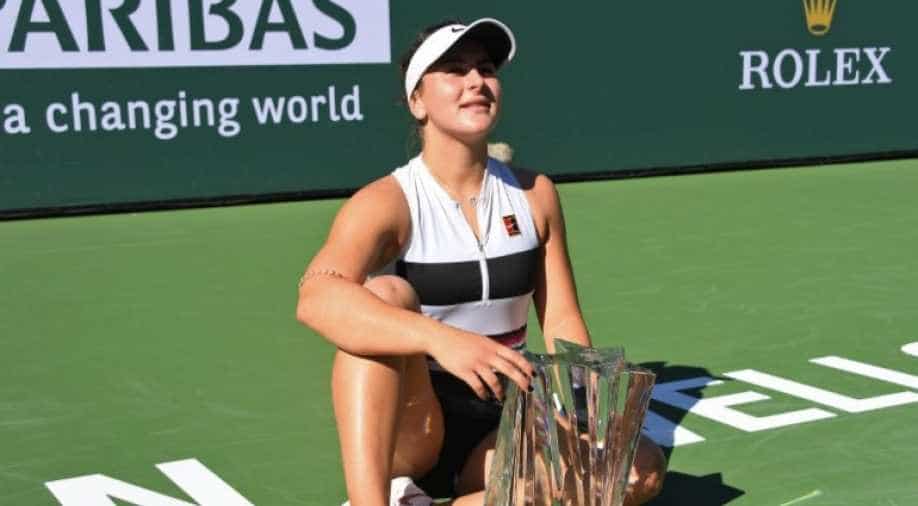 Bianca Andreescu (CAN) with the championship trophy after defeating Angelique Kerber in the final match of the BNP Paribas Open. Photograph:( Reuters )

Andreescu became the first wild card to win the WTA title at Indian Wells on with a gritty 6-4, 3-6, 6-4 victory over Wimbledon champion Angelique Kerber.

Canadian tennis player Bianca Andreescu followed in the footsteps of another teen sensation Naomi Osaka, who was a little-known 20-year-old when she won the title last year.

Osaka used it as a springboard to win titles at the US and Australian opens while ascending to the world number one ranking in January.

"Naomi (Osaka) did this last year and now to be able to have my name in front of so many amazing champions it means the world to me," said Andreescu during the post-match press conference.

"It's been a crazy ride, truly a Cinderella story," she added.

Andreescu became the first wild card to win the WTA title at Indian Wells on with a gritty 6-4, 3-6, 6-4 victory over Wimbledon champion Angelique Kerber.

Ranked 60th coming into the tournament, Andreescu will rise to 24th in the world with her first WTA title.

When she finally converted her fourth match point she kissed the sun-baked court and flopped spread-eagled on her back.

The 18-year-old shook off fatigue and rallied from a break down in the third set to topple the eighth-ranked German.

"I was actually praying, like every point, because I started cramping at 5-4 and then… no, actually at 5-3 and then it was crazy," reacted Andreescu after his historic win.

"I just prayed and then God did its stuff and then I managed to pull through," she added.