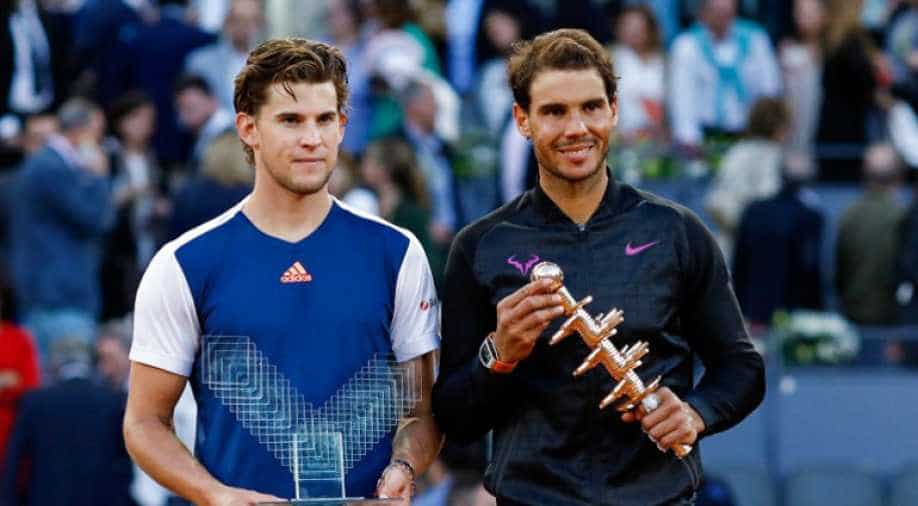 Nadal had easily beaten Thiem 6-4 6-1 in Barcelona but got an early scare when he was broken in Sunday's third game, soon falling 3-1 behind as the Austrian held. Photograph:( AFP )

Rafael Nadal consolidated his flying start to the clay-court season by taking a record-extending fifth Madrid Open title on Sunday (May 14), battling past a determined Dominic Thiem to win 7-6(10-8) 6-4.

The Spaniard, who snapped a seven-match losing streak against Novak Djokovic to win their semi-final on Saturday, was given a much sterner test by Thiem than in last month's final of the Barcelona Open.

Nadal had easily beaten Thiem 6-4 6-1 in Barcelona but got an early scare when he was broken in Sunday's third game, soon falling 3-1 behind as the Austrian held.

Nadal broke back to win the sixth game and earned three set points at 5-4 but world number nine Thiem saved each one to eventually hold and force the tie-break.

The pair stayed neck and neck until Thiem lost his nerve and made two unforced errors in a row, gifting Nadal the set.

The 14-times grand-slam winner broke in the opening game of the second set and saved a break point in the next, maintaining a two-game advantage until a thrilling 10th game.

The 23-year-old Thiem earned two break points which Nadal saved to move within a point of the title.

Thiem resisted three championship points but Nadal seized the fourth with a drop shot to the back of the court to clinch his third consecutive clay-court crown, after winning in Monte Carlo and Barcelona in April, and the 72nd tournament win of his career.

"The truth is I was up against an opponent who in the next five to 10 years will be fighting for the most important titles so I'm very happy to have won; it was a very exciting game," Nadal told Television Espanola.

"It was a very important final for both of us -- for him as it was the first in the Masters 1000 and for me it's always special to play here in Madrid in this unique tournament. You never know when it might be the last so I always try to enjoy it."