'My God, she's beautiful,' thought James Anderson when he saw Stuart Broad for the first time 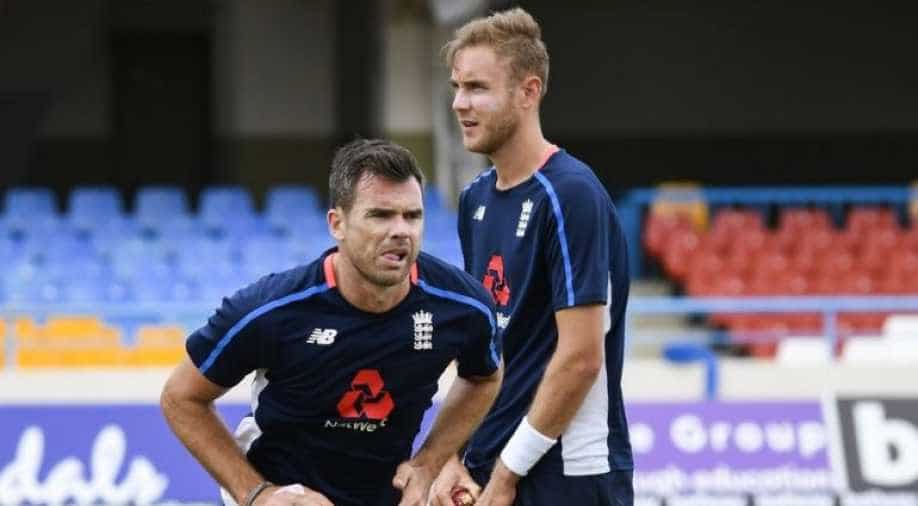 In his new book, James Anderson gave an insight into his world and penned down what really happened in his cricket life beyond the boundary rope

England's pacer James Anderson said, "My God, she is beautiful," when he saw Stuart Broad for the first time in the dressing room.

James Anderson revealed it in his new book, excerpts of which were published by British tabloid The Sun. Anderson twitted about his new book 'Bowl. Sleep. Repeat.' which will be released on June 3.

In his new book, James Anderson gave an insight into his world and penned down what really happened in his cricket life beyond the boundary rope.

In the book, he wrote, "The first time Stuart Broad walked into the dressing room, with his flowing blond hair, striking blue eyes and perfect figure, I thought: 'My God, she's beautiful'. It’s surreal we’ve taken more than 1,000 wickets between us."

About Broad, he further wrote, "We've never been in competition as bowlers because our skills are different. Stuart has been under pressure at times from bowlers who get steep bounce and move the ball off the seam and I have from the skiddier ones who swing the ball. It’s never been me or him in selection."

"I really respected the way Stuart responded to being left out in favour of Sam Curran in the West Indies in 2019," the pacer added.

I’m delighted to announce that my new book BOWL. SLEEP. REPEAT. will be hitting the shelves on June 3rd this year! Step inside my world as I give you my insight into what really goes on tour and beyond the boundary rope! Available to pre-order now, https://t.co/CLXSK47ndL pic.twitter.com/XMpST903XV

Anderson also mentioned another hilarious incident that included Graeme Swann. He wrote, "I remember when Andy Flower had taken over and we were having a team talk."

"Flower required a respectful silence when he was speaking," he added.

"Halfway through, Swanny farted. It was loud. To this day, the loudest fart I’ve ever heard. Flower looked at him, in borderline shock, then paused. Swanny apologised," wrote Anderson.

Anderson also penned down his thoughts about Alastair Cook. He said, "I remember my first meeting with Alastair Cook clearly."

"We became very close. He’s godfather to my eldest, Lola, and our family gets down to his farm when we can. Cooky has replaced parts of his banister with stumps from landmark Tests. My interest was piqued as I’ve been  wondering what to do with my balls and stumps," said Anderson.

"I have two pictures of me with the Queen by the bathroom, but other than that nothing on display. Cooky is a proper, real-life farmer. He certainly knows his way around a sheep," he added.

Anderson, known for his swing bowling has played 148 Test matches and took 575 wickets.