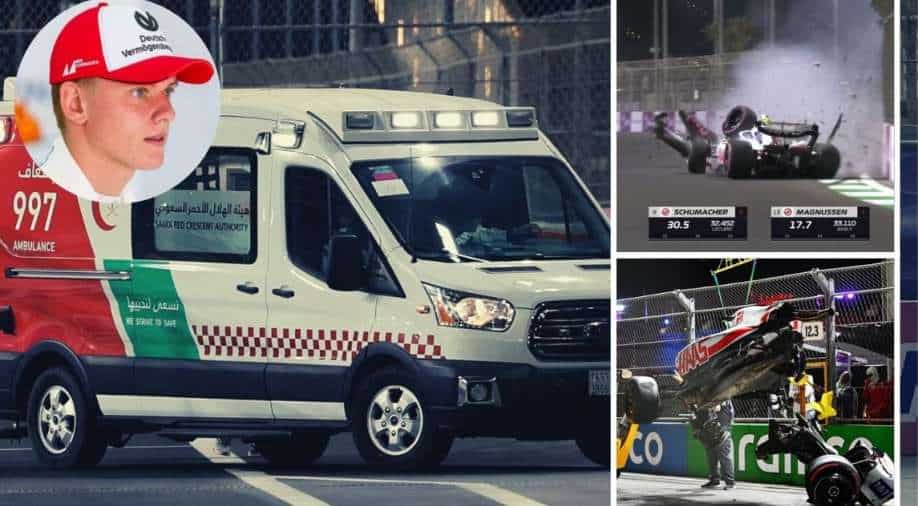 Mick Schumacher lost control of his Haas at high speed, clipped a kerb and then went straight into the wall. Photograph:( Twitter )

Schumacher crashed heavily into a concrete barrier at high speed and was airlifted to the hospital for precautionary checks.

The son of a seven-time world champion lost control of his Haas car after appearing to clip a kerb at Turn Nine and then went straight into the wall.

A sigh of relief, as the 23-year-old German driver insisted that he is 'OK' but he will not take part in Sunday's Saudi Arabian GP. Haas confirmed Mick has been released from the hospital and has returned to his hotel.

The driver himself tweeted later: "Hi everyone, I just wanted to say that I'm ok. Thank you for the kind messages. The car felt great @HaasF1Team, we'll come back stronger."

The crash was so impactful, two wheels were torn away from the car during the Q2 session. A medical crew arrived to take him from his badly damaged car to the medical centre at the Jeddah Street Circuit.

As per reports, he was conscious and speaking. He was reported to have been able to remove his own gloves as he departed in an ambulance.

"We've heard that Mick is conscious, out of the car and currently on his way to the medical centre," tweeted the Haas team.

The session was red-flagged after the estimated 240kh accident in which the rear of the Haas car was split away from the main body.

Mick Schumacher will miss the Saudi Arabian GP after a huge accident in qualifying.

That Mick is physically well after the crash is another reminder of the strength and safety of modern F1 cars for which we are incredibly thankful#SaudiArabianGP #F1 pic.twitter.com/qhLcw0elb7

Haas said they will run just one car in Sunday's race with Kevin Magnussen carrying their hopes. "Schumacher was taken to the trackside medical centre following a significant accident at Turn 12," said Haas in a statement.

"After his assessment revealed no injuries, he was transferred to King Fahad Armed Forces Hospital in Jeddah for precautionary checks. The team has subsequently taken the decision to contest the Saudi Arabian Grand Prix with the sole entry of Kevin Magnussen," the statement added.

Hi everyone, I just wanted to say that I’m ok🙏
Thank you for the kind messages.
The car felt great @haasf1team, we’ll come back stronger❤️ pic.twitter.com/Mwpy0767kN

Hi everyone, I just wanted to say that I’m ok🙏
Thank you for the kind messages.
The car felt great @haasf1team, we’ll come back stronger❤️ pic.twitter.com/Mwpy0767kN

We can confirm that Mick has been released from hospital and has returned to his hotel.#HaasF1 #SaudiArabianGP