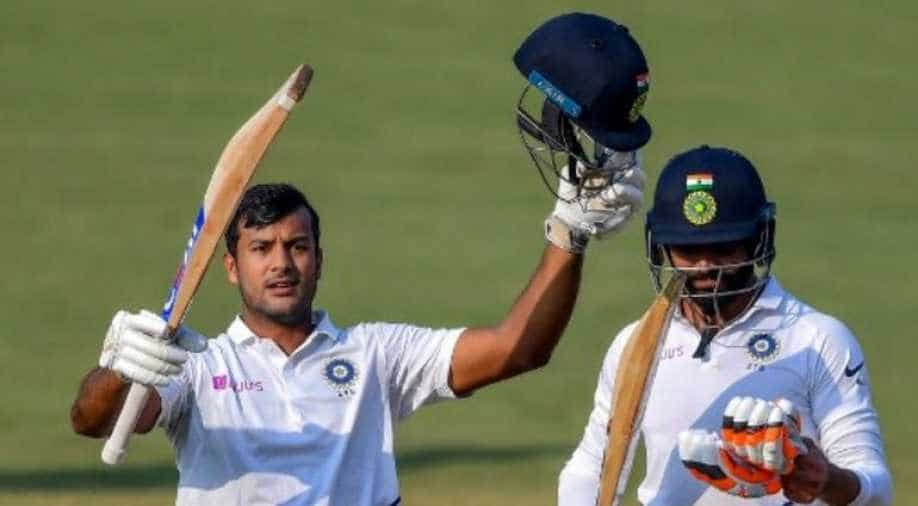 India's Mayank Agarwal (L) celebrates after scoring a double-century (200 runs) as teammate Ravindra Jadeja looks on during the second day of the first Test cricket match of a two-match series between India and Bangladesh at Holkar Cricket Stadium in Indore on November 15, 2019. Photograph:( AFP )

Shikhar Dhawan was ruled out after he suffered  "deep cut" to his left knee.

India's Test opener Mayank Agarwal is likely to make his debut in One-Day international after being named a replacement for Shikhar Dhawan for the three-match ODI series against the West Indies.

Shikhar Dhawan was ruled out after he suffered  "deep cut" to his left knee.

"The BCCI medical team feels that while Dhawan's stitches are off and his wound is healing gradually, he still needs some more time before he regains full match fitness," India's cricket body said.

Dhawan's stitches have come off but the BCCI medical team has ruled that more time is needed for the wound to completely heal.

Agarwal had incidentally replaced Dhawan in India's world cup squad earlier this year but did not get to play a game, with KL Rahul fielded as the first-choice backup.

Agarwal has had a fantastic initiation into international cricket with 872 runs in 9 Tests since making his debut in Australia last year.

India's all-rounder Hardik Pandya meanwhile is targeting a return to international cricket during the tour of New Zealand in February.

Pandya underwent back surgery in September to fix a long-standing problem with the medical team deciding on the timeline to ensure he was in peak condition for the T-20 World Cup next year in Australia.