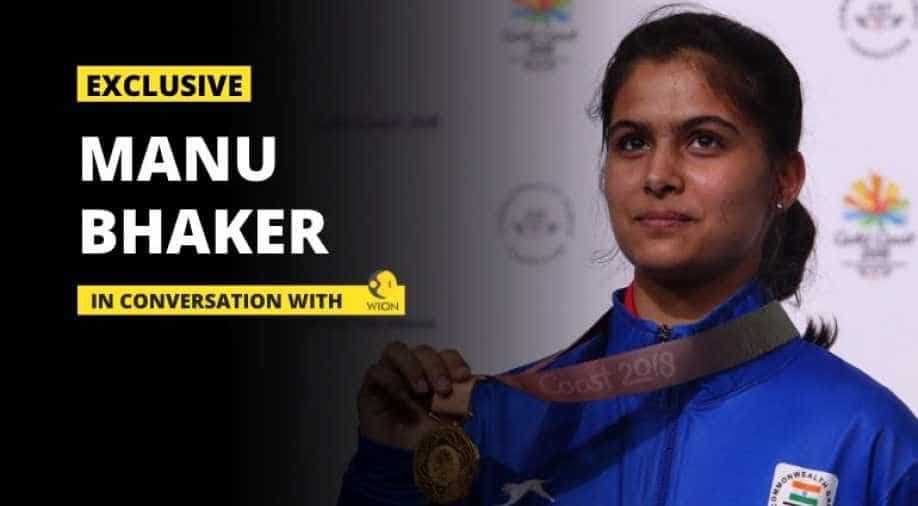 Manu Bhaker: No player will feel safe at a camp at the moment Photograph:( AFP )

One of the youngest stars of Indian sport and world no. 2 in Women’s 10-metre air pistol event in shooting, Manu Bhaker, in an exclusive interview with WION’s Sports Editor, Digvijay Singh Deo, spoke about things ranging from life in lockdown, technology in training, Tokyo Olympic postponement, bonding with Saurabh Chaudhary, idea of quarantine camp for Olympic hopefuls, and more.

One of the youngest stars of Indian sport and world no. 2 in Women’s 10-metre air pistol event in shooting, Manu Bhaker, in an exclusive interview with WION’s Sports Editor, Digvijay Singh Deo, spoke about things ranging from life in lockdown, technology in training, Tokyo Olympic postponement, bonding with Saurabh Chaudhary, idea of quarantine camp for Olympic hopefuls, and more.

Digvijay Singh Deo: How has life been for you Manu away from the hustle and bustle of Delhi that you had gotten used to over the last couple of years since you broke into the Indian team...

Manu Bhaker: I think I'm enjoying the lockdown here with my family. I do miss the shooting range, but not the hustle and bustle of Delhi, I'm delighted to be here in Charkhi Dadri.

DSD: So how have you been keeping yourself busy during this period, I imagine you must be using this time to catch up on your college studies.

Manu Bhaker: Yes, I love to study and have been doing that a lot lately. Apart from that, I'm also training regularly, so my shooting hasn't suffered to a great extent.

DSD: What is your thought process at the moment while shooting. Is it just to maintain your skill levels and stay in touch with the game?

Manu Bhaker: I am working on a few weaknesses in my game, apart from that I'm just trying to train the same way i used to before the lockdown. I'm trying to cope with the situation in the best way I can and hopefully, there won't be a drop in the level of my performances in the future. DSD: What are the issues you have been working on, has this break given you an opportunity to improve certain aspects of your game?

Manu Bhaker: I haven't been home for such an extended period of time in the last three years. In a way that has given me time to work on my fundamentals- my balance, stability and follow through.

DSD: You must have been in touch with your coaches through this period. What has coach Jaspal Rana been telling you and how regularly are you staying in touch with him and the rest.

Manu Bhaker: Yes, I have communicated with him during this period whenever I have needed any assistance, but we aren't in touch on a daily basis.

DSD: You just turned 18 a short while back, but you have already won so much in your sport. Considering the fantastic year you had in 2018 and 2019, how did you react to the Olympic postponement, did you feel like you could win the gold for India?

Manu Bhaker: That's a tricky question. I was certainly in good form leading up to the games, but so were many other shooters. I felt like I was mentally prepared for the event to take place in 2020 and it was very disappointing for me when the postponement announcement was made, but I realise that there was no other option available to the international Olympic committee. Health has to take priority over everything else. We will get chances in the future to represent India at the games and hopefully, we will be able to maintain our performance levels.

DSD: How do you refocus now with the Olympics 14 months away, do you think it gives you a chance to expand on your shooting knowledge or is it wiser not to change things right now and continue with what was working for you.

Manu Bhaker: I'm just going with the flow. I don't think I need to bring in substantial changes to my game, I'm satisfied with my equipment as well. I was extremely excited about the events leading up to the original 2020 Olympics- the Munich World Cup, Delhi World Cup and various test events. It would have been an opportunity for me to gear up for the games. Those events were obviously cancelled and the shooting calendar has been almost wiped out, however, I don't see any reason to make considerable changes to my game during this enforced break.

DSD: Its been a meteoric rise since you won that gold in Mexico and the thing I have noticed with you is this love for competition and also winning. Right now there is no competition scheduled till the end of the year. So how do you compensate for the lack of action?

Manu Bhaker: I'm not really craving for competition at the moment, so I'm not undertaking high-intensity training sessions right now. I'm just trying to maintain my form. Before the lockdown, I used to train for 8-10 hours a day at the Karni Singh shooting range in Delhi, whereas now that time has reduced to four hours a day on an average. This will also enable me to recover from my niggles and injuries and put me in the best position to perform at a high level when international events resume.

DSD: Now ever since you picked up the gun you have been shooting non-stop, how frustrating has this hiatus been for you considering it has now almost been three months.

Manu Bhaker: I just can't wait for this lockdown period to get over. I am eagerly waiting for the health situation to improve and the national camps to begin so that I can return to some sort of normalcy. 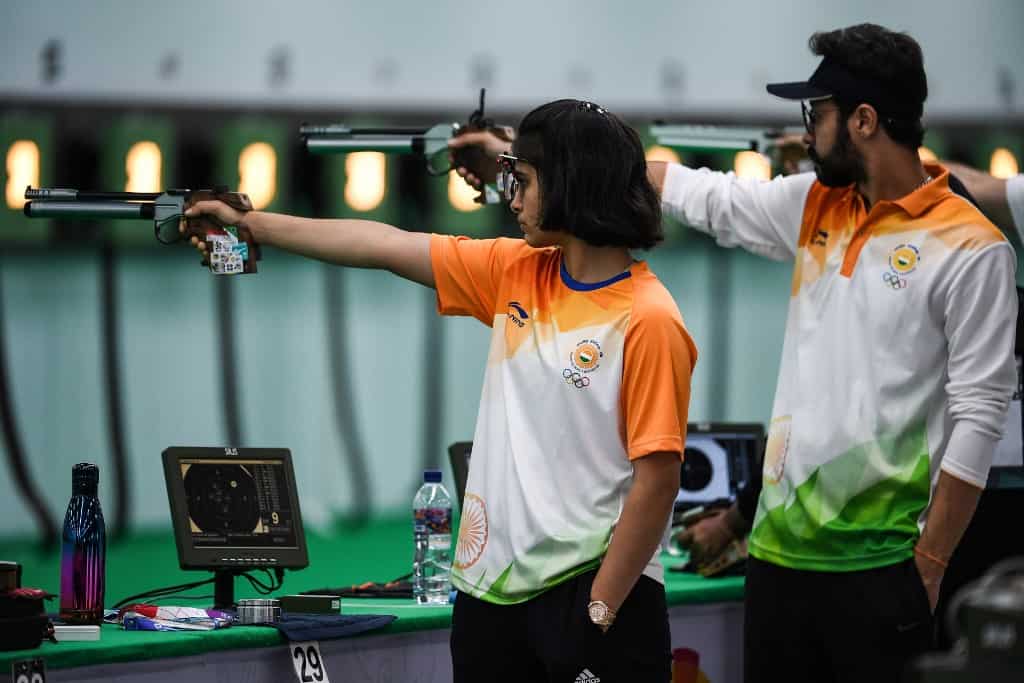 DSD: You have been shooting some of these online competitions. Does it give you that same rush of shooting a proper event because where is the pressure, where is the drama that only competition can give?

Manu Bhaker: Online competitions definitely help in maintaining your skills. I would say that the pressure of competing in the same and there is still a desire to win. However, because there are no ranking points on the line and no medals up for grabs, it does affect your approach to the event. I've participated in a few of these competitions but I have missed a few of late since I have been busier with my college work.

DSD: A lot of your fellow Olympic quota winners are pretty young. Have you been in touch with any of them and how are they coping?

Manu Bhaker: I haven't really had the opportunity to be in touch with them since I have mostly been busy with my shooting training and college work.

DSD: A lot of your success in world shooting has also come in the mixed event. Now usually in a team sport, you depend on your partner, here the dynamics are different but yet you and Sourabh Chaudhary have sort of mastered this event.

Manu Bhaker: I just focus on my performance. I have faith in his ability, but I approach the mixed event the same way i approach an individual event and that has seemed to work for me so far.

DSD: Were you surprised with the level of domination you and Sourabh Chaudhary had in the mixed event in the World Cups.

Manu Bhaker: We shot world record scores at the Delhi World Cup, Asian Championships and the Munich World Cup last year. Even at the Rio World Cup, we made a brilliant comeback to win the title. It is truly remarkable that we won all four ISSF World Cup mixed team titles last year and I'm thrilled about it. It is difficult for me to put in words how delighted I am.

DSD: Now the thing I have noticed is that you are more of an extrovert than Saurabh who hardly speaks at all. So how do team dynamics work here?

Manu Bhaker: There is hardly any communication between us. We sometimes don't even greet each other when we meet, but that is how the dynamic is and both of us are comfortable with that. He and I are different individuals, but there is no problem with the team. Even when we set the world record, there was hardly any conversation between the two of us. In fact, I haven't seen Saurabh talk to anyone in the shooing team. He is an introvert and that's just the way it is. 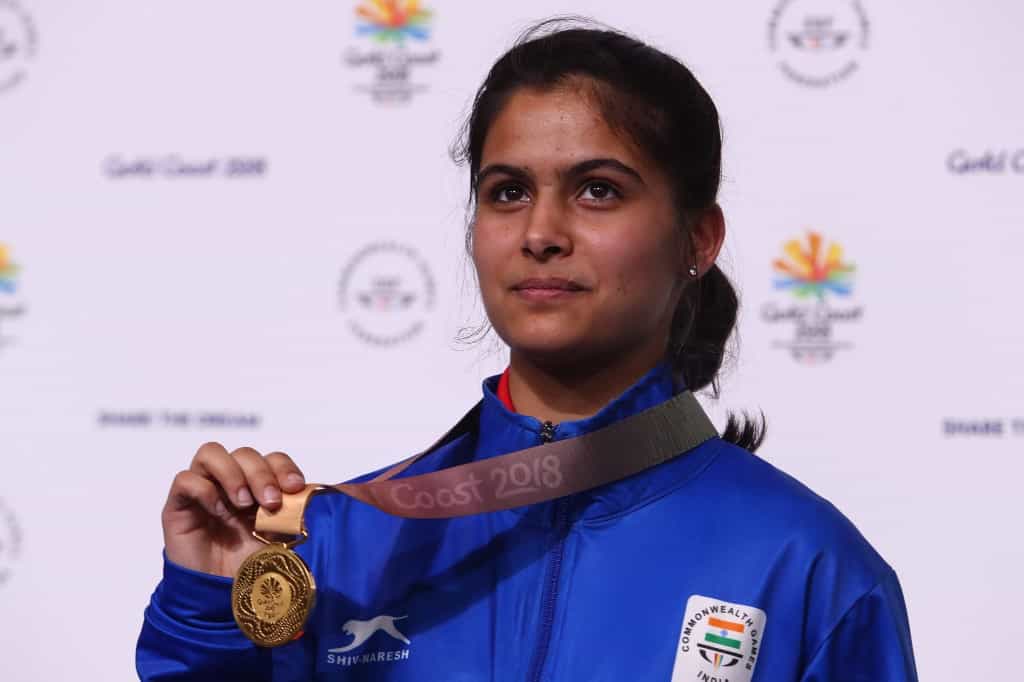 DSD: You have achieved a lot in your career at such a young age, but it's nice to see that it hasn't changed how you are as a person, you always have your India colours on at public gatherings.

Manu Bhaker: I love my country and its people. Even in most of the functions, i prefer wearing my Team India attire. I have worn a dress at very few gatherings, only when the occasion requires me to do so.

DSD: Will you be thinking of moving to a national camp soon or do you think it is safer for you to continue training at home?

Manu Bhaker: Given the current situation, I definitely think it would be safer to stay home and train. If the camps are organised, they would probably be in Delhi or Bhopal, where the number of coronavirus cases is very high. So at the moment, I am happy to train at home.

DSD: When do you think you will feel comfortable in attending a national camp?

Manu Bhaker: I think no player will feel safe in attending a national camp till the coronavirus is contained to a considerable extent. Players will not be able to focus on their game if they are constantly worried about their health and safety. Players have to be free of mental anguish to be able to train at a high level.

DSD: There has been talk of the NRAI organising a quarantine camp where everyone stays at one place and trains with limited interaction, would you be comfortable in an environment like that?

Manu Bhaker: The idea of a quarantine camp does sound encouraging, but even in that environment, there will be people who will be moving in and out of the area, which could possibly be a danger.

DSD: At some point, do you feel like you will have to take some sort of a risk and head out to a camp, especially when the Olympics are approaching...

Manu Bhaker: If the federation does organise a camp, I hope it is only for the Olympic quota holders. We have to ensure that there are a minimum number of people in these camps so that the risk of the virus spreading is mitigated.

DSD: Do you think the NRAI should declare the Olympic team now so that all of you can be relaxed and focus...

Manu Bhaker: I firmly believe that the team should be announced because it would give us shooters some clarity and help us prepare better for the games. All us shooters are just waiting for the team to be announced and it will be a big relief for everyone involved. Mentally as well, it will be reassuring and will give a direction to our plans for the Tokyo Olympics.