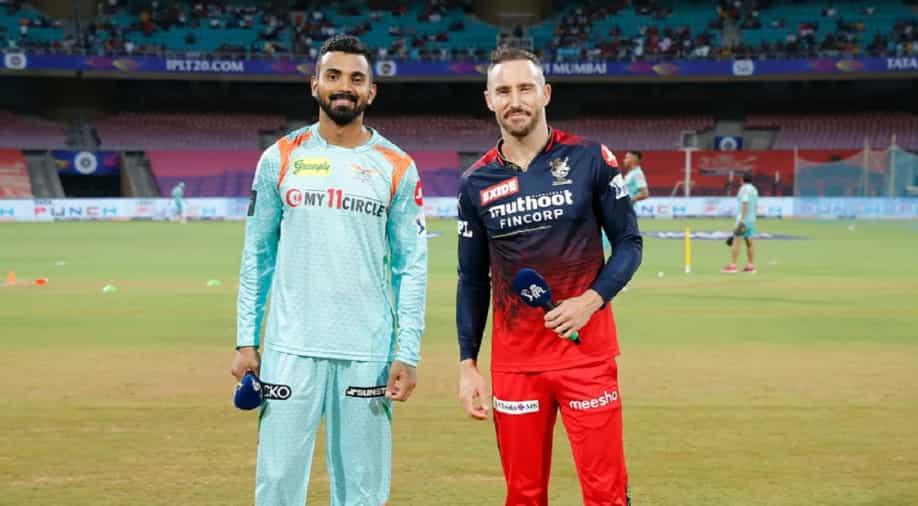 Lucknow Super Giants will take on RCB in the Eliminator in IPL 2022 on Wednesday. | Photo - IPL | Photograph:( Others )

Royal Challengers Bangalore (RCB) will lock horns with Lucknow Super Giants (LSG) in the Eliminator of IPL 2022 on Wednesday (May 25). The winner will take a step towards securing a berth in the final while the loser will be out of the tournament. Here is our prediction for the game.

Lucknow Super Giants (LSG) will take on Royal Challengers Bangalore (RCB) in the Eliminator at the Eden Gardens in Kolkata on Wednesday (May 25) as both teams aim to take a step towards making it to the final of the Indian Premier League (IPL) 2022. While KL Rahul-led LSG finished third on the points table with 18 points in 14 games during the league stage, RCB made it to the playoffs after some favour from Mumbai Indians, who beat Delhi Capitals in their final game to help Faf du Plessis & Co. qualify.

RCB players were ecstatic and were seen celebrating passionately as Mumbai Indians defeated Delhi Capitals at the Wankhede Stadium to ensure Du Plessis' men lived another day to fight this season. However, the onus will now completely be on RCB, who will have to win three matches on the trot in order to bring an end to their long-standing trophy drought.

RCB are among the three teams in IPL history to have never won the trophy despite being part of the competition since its inception in 2008. Standing in their way are Lucknow Super Giants, who have shown a lot of promise in their debut season itself and stand just a couple of steps away from playing their first final.

For RCB, Virat Kohli's return to form will be a huge boost as the batting maestro bounced back strongly in their last game against Gujarat Titans with a brilliant 73. The likes of Faf du Plessis, Dinesh Karthik and Glenn Maxwell have also been among the runs and will hope to make an impact in the must-win game against LSG on Wednesday.

Bowling remains their biggest concern and RCB will hope for the likes of Jos Hazlewood and Harshal Patel to deliver against KL Rahul's men. On the other hand, Lucknow Super Giants have seen their top three - skipper Rahul, Quinton de Kock and Deepak Hooda do the majority of run-scoring for the side this season.

They will be hoping for the other batters to come to the party in the Eliminator. A lot will depend on the likes of Ayush Badoni, Marcus Stoinis and Jason Holder in LSG's middle-order. Meanwhile, their pace attack which has been impressive this season will look to trouble the RCB batters at the Eden Gardens.

Royal Challengers Bangalore (RCB) have played some fantastic cricket under Du Plessis and have looked far better than in previous seasons under pressure. They are expected to beat Lucknow Super Giants on Wednesday and take on Rajasthan Royals in the second Qualifier for a spot in the IPL 2022 final.