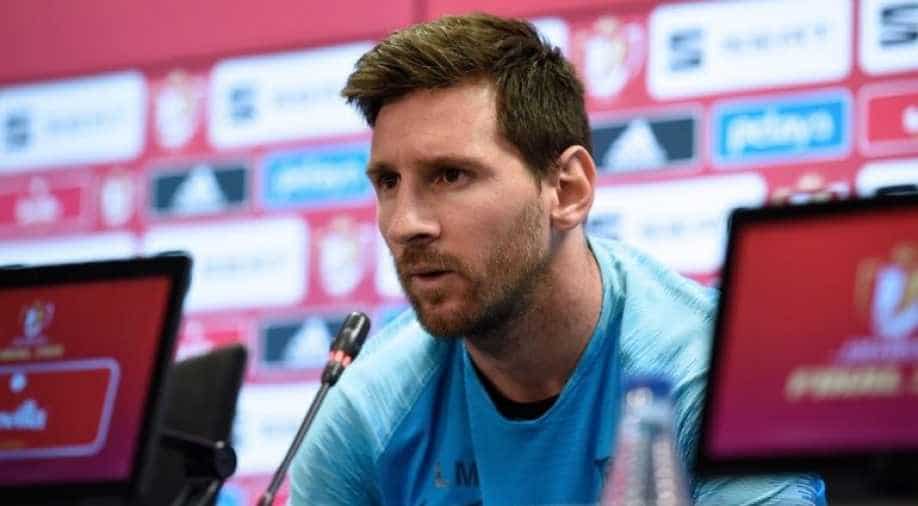 Barca can complete a domestic double by beating Valencia in Seville, but even that will not erase the disappointment of throwing away a three-goal lead at Anfield

Lionel Messi wants Ernesto Valverde to continue as Barcelona coach but admits the team have not recovered from their Champions League loss to Liverpool as they face Valencia in the Copa del Rey final on Saturday.

After winning La Liga by 11 points, Barca can complete a domestic double by beating Valencia in Seville, but even that will not erase the disappointment of throwing away a three-goal lead at Anfield.

Valverde conceded his future was uncertain after the loss but the club's president, Josep Maria Bartomeu, has since said the coach will remain in charge.

"I honestly believe the boss has done an impressive job during his time in charge," Messi said at a press conference on Friday.

"I think that in the defeat to Liverpool, he is practically blameless, we are the only ones to blame for that match.

"That can happen one year. but two years in a row is unforgivable. The boss will obviously be partly to blame but it is the players even more.

"I would like him to continue. Last year, we did the double and even though it was stained by getting knocked out of the Champions League, this year we can win the double again.

"If you look at his two years, there have been two bad games, but beyond those the rest has been good."

Valverde was also asked again about his future.

"I have no complaints from the president or the board," said Valverde, who added: "You seem very worried, don't worry so much."

Barcelona were desperate to win the Champions League, after failing to reach the final in four consecutive years while also watching Real Madrid lift the trophy three times in a row.

Since losing to Liverpool, Valverde's team have beaten Getafe 2-0 at Camp Nou before ending the league season with a 2-2 draw away at Eibar on Sunday.

"We are still recovering from the game against Liverpool, at least I am, I just want to win this final and finish the year with another title," Messi said.

"It was a very hard blow and both I and the whole club have had a hard time lifting ourselves, which I think has been shown in the matches we have played since.

"It was hard but that's it, this is a final, it is a title and we have the chance to do a double.

"We need to think that we have to win, like in any other final that we play. Obviously not winning this final would be make things even worse."

Barcelona are chasing a record fifth consecutive Copa del Rey triumph to go with their eight La Liga titles in the last 11 years.

"After a bump so big we have to face things with integrity," said Valverde.

"You cannot hide your head in a hole and disappear off the map. We responded after Anfield in La Liga and now we cannot wriggle out in the cup.

"We have to go all out for a title we have been pursuing since January."

Valverde said Nelson Semedo has recovered from his head injury and is likely to be available while late decisions will be made on Arthur Melo and Philippe Coutinho, who are close to shaking off hamstring and thigh injuries respectively.

But Marc-Andre ter Stegen, Luis Suarez and Ousmane Dembele are all out, with Jasper Cillessen expected to start in goal.

Unlike Barcelona, Valencia are flying high after completing a late-season surge by finishing fourth in La Liga last weekend.

The club has not lifted  trophy since they won the Copa del Rey in 2008.

"We have the experience that we have," coach Marcelino said on Friday. "There may be something missing in that regard but for sure, we have plenty of heart."