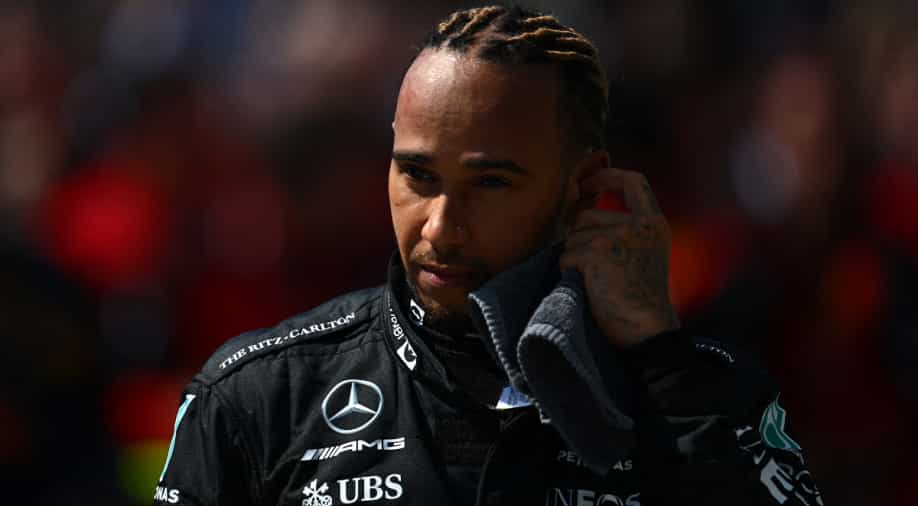 Hamilton calls for action amid storm over racist comment from Piquet. Photograph:( AFP )

Lewis Hamilton called for action to change "archaic mindsets" after Brazil's Nelson Piquet used a racial slur against him in an interview.

Lewis Hamilton called for action to change "archaic mindsets" after a racist remark about him by Brazilian triple champion Nelson Piquet emerged on social media, triggering widespread condemnation. In a Brazilian interview on YouTube in November, Piquet, 69, used a racial slur in Portuguese when referring to the seven-time world champion, when commenting on Hamilton`s British Grand Prix crash with Max Verstappen.

He also said Hamilton had "played dirty" in the incident. Piquet`s daughter Kelly is Verstappen`s partner, and the comments resurfaced as the drivers prepare to return to Silverstone this weekend. Hamilton, who was recently awarded honorary Brazilian citizenship and is the sport`s only Black driver, responded on Twitter.

"It`s more than language. These archaic mindsets need to change and have no place in our sport," the Mercedes driver said.

"I’ve been surrounded by these attitudes and targeted my whole life. There has been plenty of time to learn. Time has come for action."

It’s more than language. These archaic mindsets need to change and have no place in our sport. I’ve been surrounded by these attitudes and targeted my whole life. There has been plenty of time to learn. Time has come for action.

Also Read: 'Who knows?': Serena Williams on returning to Wimbledon next year after loss against Harmony Tan

Motor racing`s governing body FIA, Formula One and Mercedes all issued statements condemning racism but without mentioning Piquet by name.

"Discriminatory or racist language is unacceptable in any form and has no part in society. Lewis is an incredible ambassador for our sport and deserves respect," Formula One said.

Mercedes said Hamilton was "a true champion of diversity on and off track", while FIA expressed solidarity and support for the Briton`s "commitment to equality, diversity and inclusion in motor sport".

Other prominent sporting figures expressed support for Hamilton, with tennis player Naomi Osaka retweeting his response with the added words "Emphasis on `there has been plenty of time to learn`."

"The comments made towards Lewis should not be tolerated, and we should continue to push for a more diverse and inclusive sport," said Ferrari driver Charles Leclerc.

"We need to remove discriminatory behaviour and racist language in any form from not just our sport, but our society as well."

Piquet`s press team did not immediately respond to a request for comment. Brazil`s former Environmental Minister Carlos Minc called Hamilton a hero and said the driver had helped in the fight against the clearing of a forest to build a circuit in Rio de Janeiro.

Piquet, who won his titles in 1981, 1983 and 1987, has been a vocal supporter of far-right President Jair Bolsonaro and drove the presidential Rolls-Royce during a ceremony last year. Hamilton was made an honorary citizen of Brazil after the lower house this month passed a bill proposed by congressman Andre Figueiredo.