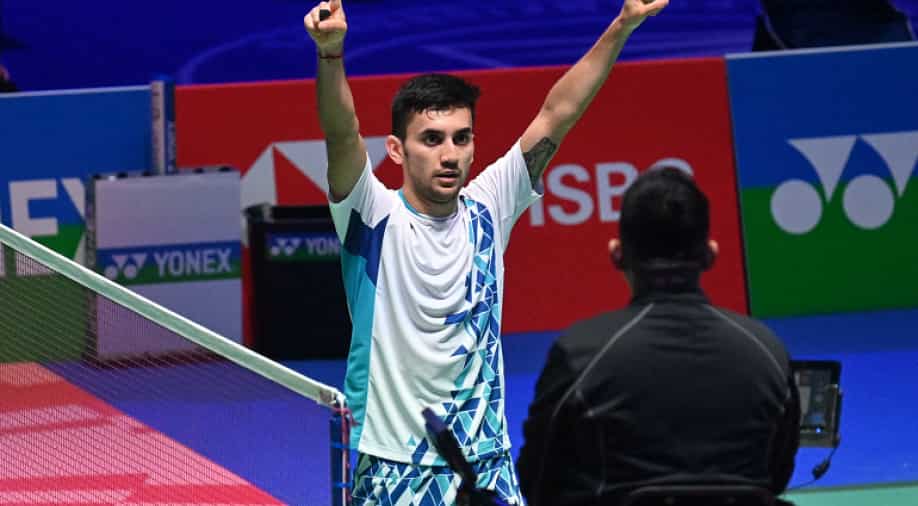 Lakshya Sen has entered the final of the All England Badminton Championships 2022. Photograph:( AFP )

Ace Indian shuttler Lakshya Sen defeated defending champion Lee Zii Jia of Malaysia on Saturday to book a spot in the final of the All England Badminton Championships.

The 20-year-old Sen became only the fourth men's singles player after Prakash Nath, Prakash Padukone and Pullela Gopichand to reach the final of the prestigious tournament after outwitting sixth seed Lee 21-13 12-21 21-19 in a gruelling semifinal match that lasted one hour and 16 minutes.

"I was definitely nervous but I was just trying to play one point at a time and not the occasion," said Sen.

"Towards the end, I was just trying to not thing about the things that was going around, it was a All England semifinal and the thoughts were coming in but I was trying to keep myself focussed.

"I am happy that I won the match and I get to play tomorrow. I will take this time to recover and go all out tomorrow."
Sen has been in sensational form in the last six months. He secured his maiden world championships bronze in December, before winning his first Super 500 title at India Open in January and finishing runner-up at the German Open last week.

Sen, who had defeated Lee the last time they faced in an international tournament six years ago at the India International Series, showed great tactical acumen, athleticism and mental fortitude as he recovered from a mid-game slump to script history at the prestigious tournament.

"I think in the first game, I got a good length. I was playing well at the nets and lifts were going really good but I made lot many errors in the second game and he got a lead in the beginning and it was hard to recover from there," said the world no 11.

"Going in the third game, I tried to play safe at the net rather then going too close and at the same time getting a good length.

"In the final few points, strategy was completely different because he is one of the best attacking players in the world and when there is lot of pressure you have to go all out and keep the attack. I knew in my head I can't play loose."
In the opening game, Sen showed great defensive skills and moved well in the court to eke out an 11-7 advantage at the interval.

Lee managed to unleash a couple of his trademark smashes to narrow it down to 10-12. Sen stayed in the long rallies and waited for his opponent to wilt, leading 13-11.

Sen stayed composed and his tactical play earned dividends as Lee fell into a heap of unforced errors to allow lead to the Indian at 17-12.

A net error from Lee was followed by a desperate return which went wide. Sen gathered two more points before grabbing seven game points when Lee erred again and the Indian sealed it in the first chance to take a 1-0 lead in the match.

After the change of sides, Lee stepped up his pace and quickly took a 9-2 lead. He mixed his shots well and also showed great reflex to outshine a fighting Sen.

The Indian smashed one out to allow Lee grab a huge 11-3 advantage at the break. The Malaysian was on fire after the breather as he unleashed a series of winners to zoom to 16-5 and eventually roared back into the contest after winning another exciting rally.

The duo continued to play at a frantic pace in the decider with Sen managing a 3-1 lead early on but Lee quickly unleashed a backhand cross court return to level the scores.

Lee seemed a step ahead in his pace and won a 67-shot rally next with Sen struggling at the back of his court.
A 372 km/per hour backhand smash gave another point to the Malaysian, who led 7-5 at one stage. A calm Sen drew parity at 8-8 with Lee going long. A body return gave the Indian another point but Lee managed to grab a two-point lead at the interval.

Playing with the drift now, Sen marginally erred in his lifts which went long and Lee was quick to move to 14-10.
A fighting Sen managed to narrow it down to 16-17 and then came up with a cross-court smash to soon grab two match points. Lee saved one before the Indian sealed it.

Considered a child prodigy, Sen is now just a step away from emulating his mentor Prakash Padukone. "...All those time when people used to say...That gave me belief that I can do it and it kept me going and tomorrow I am playing the finals," he said.

Indian women's doubles pair of Treesa Jolly and Gayatri Gopichand will take on the Chinese pair of Zhang Shu Xian/Zheng Yu in the semifinals later in the day.