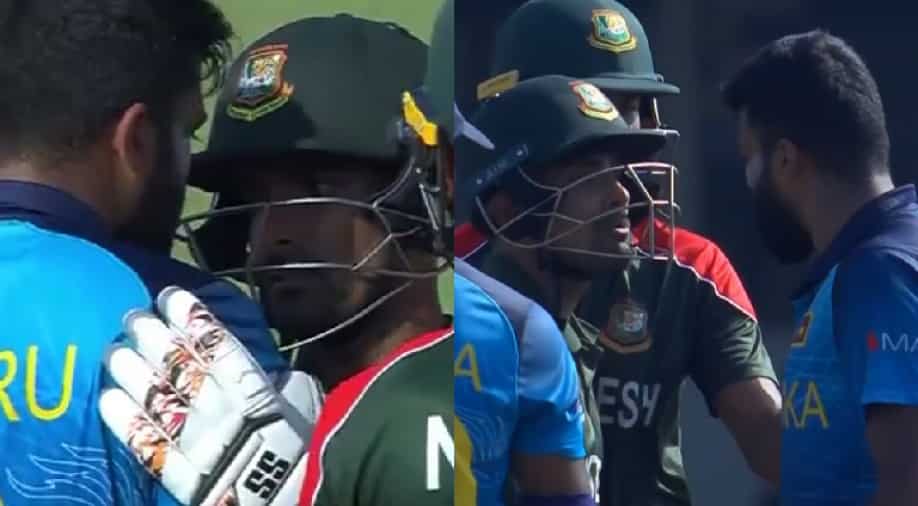 Lahiru Kumara and Liton Das were engaged in a heated spat during SL vs BAN clash. Photograph:( Twitter )

Sri Lanka bowler Lahiru Kumara and Bangladesh batter Liton Das engaged in a verbal spat during the T20 World Cup 2021 clash between the two sides in Sharjah Cricket Stadium in Sharjah on Sunday.

Bangladesh batter Liton Das got involved in a heated argument with Sri Lanka pacer Lahiru Kumara during the clash between the two sides in the T20 World Cup 2021 on Sunday (October 24). The incident took place after Das was dismissed during Bangladesh's innings in the game.

The two players had to be separated by their teammates before the umpires intervened. The clash broke out after Das was caught by Dasun Shanaka in the sixth over of his side's innings. Kumara walked towards the Bangladesh batter trying to give him a send-off before the two got engaged in a heated argument.

Das' opening partner Mohammad Naim, who was at the non-striker's end, was seen pushing Kumara which further escalated the argument. The umpires were quick to separate the players before the play resumed again at the Sharjah Stadium in Sharjah.

What was that argument between Liton Das and Lahiru Kumara? #T20WorldCup pic.twitter.com/amwEq91afY

Asked to bat first after losing the toss, Bangladesh were off to a good start as Das and Naim added 40 runs for the first wicket. While Das was dismissed on a run-a-ball 16, Naim went on to notch up a splendid 62 off 52 deliveries laced with six fours.

He combined with Mushfiqur Rahim (52 off 37 balls) to add 73 runs for the third wicket and power Bangladesh to a strong total of 171 runs. Sri Lankan bowlers were successful in restricting the run flow at the start of the Bangladesh innings but were taken to the cleaners later as they struggled to pick wickets at regular intervals.

Chamika Karunaratne, Binura Fernando and Lahiru Kumara picked up a wicket apiece for the Lankans, who will have to chase down 172 runs to win their first game of the Super 12 stage.