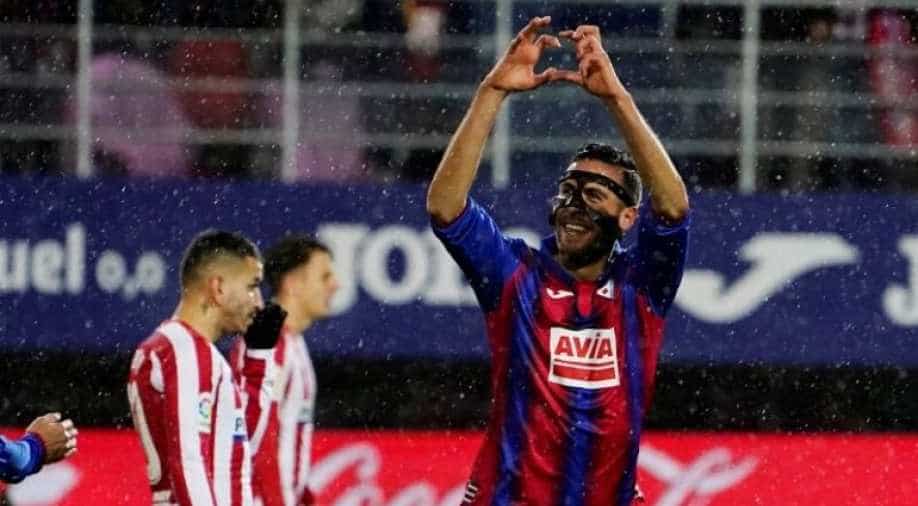 Atletico midfielder Saul Niguez, who was asked to play at left-back during the game, was scathing of his side's performance.

Atletico Madrid's hopes of getting back into the Spanish title race faded even further with a 2-0 defeat away by struggling Eibar in La Liga on Saturday.

The tiny Basque side, who have the smallest stadium in La Liga, took the lead in the 10th minute when Esteban Burgos stabbed home from close range at the far post after Atletico failed to properly defend a corner.

Atletico, who lost last Sunday's Super Cup final to Real Madrid on penalties, were without captain Koke plus defenders Kieran Trippier and Jose Gimenez and never got a grip on the game on a rain-swept evening at Ipurua.

Edu Exposito's thumping shot from the edge of the area in the 90th minute sealed Eibar's first victory in 12 top-flight games against Atletico and took them seven points clear of the relegation zone.

Atletico, meanwhile, are third on 35 points, eight behind leaders Real Madrid and five behind champions Barcelona who play at home to Granada on Sunday.

Atletico midfielder Saul Niguez, who was asked to play at left-back during the game, was scathing of his side's performance.

"We made a bad start yet again and it's been happening a lot recently. We really struggled to get going, we lacked hunger after being on a good run. This is a tough blow for us," he told reporters.

"Ipurua is a small stadium and they know exactly how to play to their strengths here, they beat us in all the second balls and knew how to deal with our attacks. We needed to play with more intelligence."

Atletico coach Diego Simeone added: "We started very badly, we barely played in the first half and didn't do what we needed to do.

"It's always been difficult for us here when we have won here the games have been very tight and today was similar, but they made the most of our mistakes and we couldn't take our chances."