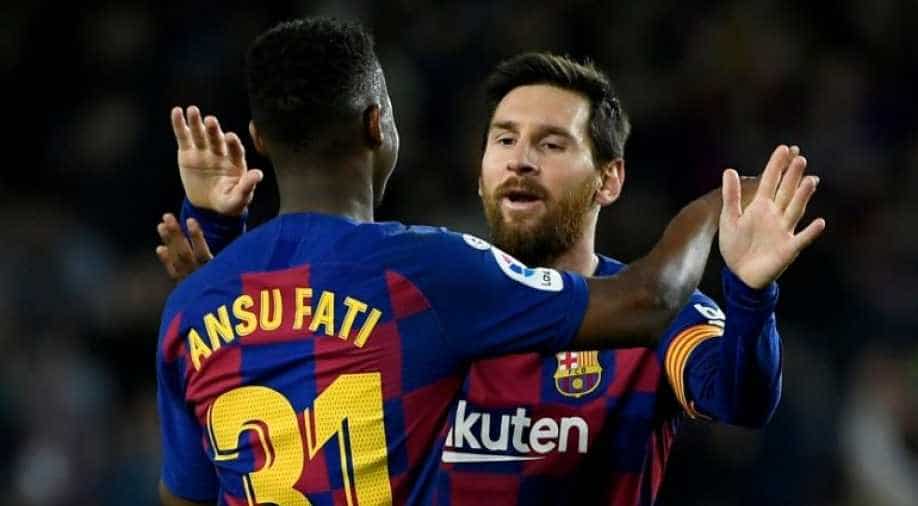 Ansu Fati became the youngest player ever to score a brace in La Liga on Sunday by capitalising on two brilliant Lionel Messi assists to give Barcelona a 2-1 victory over Levante.

Fati, at 17 years and 94 days old, broke the previous record held by Juanmi Jimenez, who scored twice for Malaga against Real Zaragoza at 17 years and 115 days old in 2010.

📚HISTORY | Today, Ansu Fati became the youngest player to ever score two goals in one game in @LaLigaEN. 🍼 pic.twitter.com/lfJqKJzGYq

Messi teed up Fati's quick-fire double with a defence-splitting pass and then a trademark weaving run before Ruben Rochina scored Levante's goal in the 92nd minute, which really should have come sooner.

Barca reduce the gap at the top to three points behind Real Madrid and begin to regain some rhythm under new coach Quique Setien after Thursday's 5-0 thumping of Leganes in the Copa del Rey.

"We could have won 8-2 or 8-3," said Setien. "We lost a little control in the second half and conceded too much but it was a good job from the team."

Yet Levante should have converted more of a handful of excellent chances in the second half, that suggested Barcelona's defensive problems and fragility when in the lead are far from solved.

Leganes and Levante, who sit 18th and 13th respectively, offered a relatively straight-forward route back to winning ways too for Barcelona, who were wobbling last weekend when they followed a last-gasp win over Segunda side Ibiza with a convincing defeat by Valencia.

Setien, who replaced Ernesto Valverde as coach last month, found his methods questioned and there was evidence against Levante to suggest he may have decided to introduce his style of play more gradually.

Yet Levante also pressed high and left gaps to be exploited, despite the likes of Valencia and Granada enjoying more success against Setien's team by sitting deep and bursting out on the break.

Fati has been one of the main beneficiaries of Setien's arrival.

He exploded onto the scene at the start of the season but was used increasingly rarely by Valverde, who may have been wary of burdening the teenager with too much too soon.

Instead, Setien has started Fati in all five of his games in charge so far and this was the first time his faith has really been rewarded.

"He is a boy who is emerging and has great potential," Setien said. "Today he had a historic day for his goals and for helping the team."

Messi's own excellent form also continues. He now has nine goals and four assists in his last 10 league games.

His first set-up for Fati came from the centre circle where he played a reverse pass through three Levante players that sent clear his teammate, who cut inside Jorge Miramon and finished.

Less than two minutes later, Fati was in again. Levante lost the ball upfield and Gerard Pique fired straight into Messi inside the right flank, midway inside the opposition's half.

He drove into the penalty area and when he finally stopped by a cluster of Levante chasers, he slid left to Fati, who fired through the legs of Aitor Fernandez for a second.

Nelson Semedo crashed a shot against the crossbar and then hopped over Tono only for Antoine Griezmann to tap wide at the front post.

But Levante were more dangerous in the second half and could have taken a draw if they had been more clinical with a handful of opportunities.

The best of them fell to Gonzalo Melero, who blazed over, and by the time Rochina's shot flew through one pair of legs and in off the hands of Marc-Andre ter Stegen, there were only two minutes remaining.

There was time for one Levante attack and Sergio Busquets' weak header gave Rochina another chance but he could not keep his shot down.

Sevilla and Real Sociedad both lost ground in the race for Champions League qualification as Getafe beat Athletic Bilbao to climb to third.

Real Sociedad lost 2-1 away at struggling Leganes while Sevilla were held to a 1-1 draw at home to Alaves.

In between, Getafe had carved out a 2-0 victory away at Bilbao to put them in pole position behind Real Madrid and Barcelona.

Jose Bordalas' team are now ahead of Sevilla on goal difference, while Real Sociedad are five points further back.

Getafe missed out on fourth on the final day of last season but they continue to prove their challenge was far from a one-off.