Klopp as Bond? Liverpool boss has his say on next 007 after Daniel Craig suggested he could be a good fit 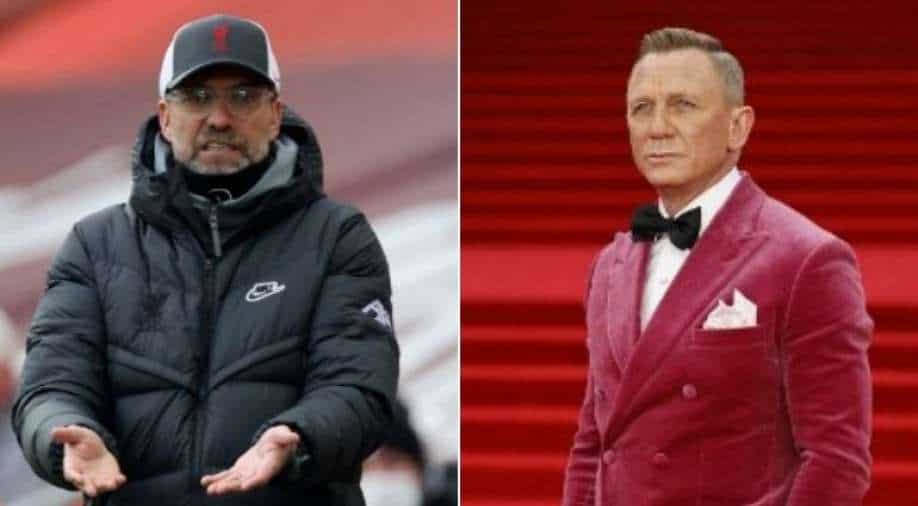 The star of the new Bond film 'No Time to Die', who is also a Liverpool fan, said he "worships" Klopp, so the Liverpool manager would make a good Bond

Jurgen Klopp has responded after Hollywood star Daniel Craig suggested that the Liverpool boss will be a good fit for the James Bond movies. Star of the new Bond film 'No Time to Die said he "worships" Klopp, so he would make a good Bond, especially given his leadership qualities. Read 'No Time to Die' review here.

During an interview with Sky Sports, Liverpool legend Jamie Carragher asked Craig: "Do you think Jurgen Klopp would make a good James Bond?"

Craig, who is also a Liverpool fan, replied: "I mean I worship him, so yes. I've been lucky enough to meet him a couple of times and you just want to follow him. There's a couple of people I've met over the years like that."

"The other one is Alex Ferguson actually, but I shouldn't really mention him! He's a leader. So I think he's kind of way beyond James Bond really," the actor added.

But with a smile on his face, Klopp said, "Thank you very much for having these nice words but I would be a really bad James Bond."

"I don't want to be James Bond. Actually, that's not true, as a kid I wanted to be James Bond. But that's long ago. So meanwhile I'm happy watching him doing what he is doing. I was lucky enough to meet Daniel Craig on two occasions I think and I actually will miss him as James Bond to be honest but let's see who will be the next one," said Klopp.

ALSO READ | How Premier League can avert the COVID-19 crisis as majority of players not getting jabbed?

"If I walk out of the water in swim shorts I think that would be the moment when the whole world would switch off. But no problem we all have our jobs to do in life and he has to save the world and I have to help Liverpool from time to time," he added.

Daniel Craig is currently busy promoting his final film as James Bond 'No Time to Die'. He first starred in Casino Royale in 2006, then in Quantum of Solace, Skyfall and Spectre.