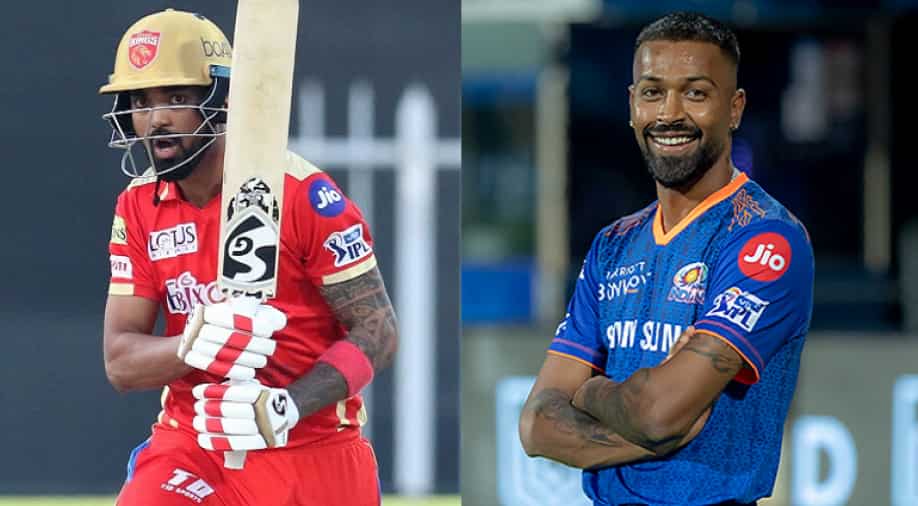 KL Rahul and Hardik Pandya are likely to fetch big amounts from their new IPL teams. | Photo - IPL | Photograph:( Others )

A number of top Indian players will go under the hammer in the upcoming Indian Premier League (IPL) mega player auction ahead of the 2022 season. Here is a look at five Indian stars who can fetch big bucks at the mega auction.

The Indian Premier League (IPL) mega auction is all set to be a grand affair this year with as many as ten teams battling it out for a number of top players who will be going under the hammer at the showpiece event. While the existing eight teams have already revealed their final retentions, the two new franchises - Lucknow and Ahmedabad can make three picks each from the pool of non-retained players.

Barring the players picked by Ahmedabad and Lucknow in the draft, all others will be heading to the mega auction. Several big Indian names, who have not been retained by their respective IPL sides will be up for grabs at the mega auction. Here we take a look at five Indian stars who are likely to fetch a huge amount at the IPL 2022 mega player auction.

One of the favourites to captain the Lucknow IPL franchise in the 2022 season, former Punjab Kings skipper KL Rahul is unlikely to head into the auction pool as he is expected to be picked in the players draft ahead of the event. Rahul is reportedly set to join Lucknow and has been offered a staggering contract.

He has been one of the most consistent performers in the IPL over the last few seasons and has been among the runs. Rahul was recently appointed as India's limited-overs vice-captain and is seen as a future leader of the national team as well. He has so far played 94 IPL matches and has an impressive 3273 runs to his name at an average of over 47.

Also Read: Faf du Plessis to Ishan Kishan: 5 players who might be bought back by their IPL franchise at mega auction

Mumbai Indians had to let go of their star all-rounder Hardik Pandya ahead of the IPL 2022 mega auction owing to his recent fitness issues and concerns regarding his bowling. Hardik, who has played an instrumental role in Mumbai Indians' success over the years, didn't bowl at all in IPL 2021 as he continues to deal with his back issues which have hampered his progress.

Hardik had been retained for a sum of Rs 11 crore (110 million) by Mumbai Indians in 2018 and is expected to go for big money once again if he heads to the auction pool. However, there is a strong chance that the all-rounder is picked by one of the two new teams - Lucknow or Ahmedabad before the auction for a huge sum.

Shreyas Iyer's rise in the Indian Premier League has been nothing short of extraordinary. From a young batting talent, Iyer matured into a fine leader for the Delhi Capitals after he was handed over captaincy midway into the IPL 2018 season. He led DC to their first-ever final in IPL 2020 and proved why he is on his path to becoming one of the future greats in the IPL.

Besides his captaincy credentials, Iyer is a reliable batsman, who has been a consistent performer in the league. He was released by Delhi Capitals after reportedly expressing his desire to look for a leadership role elsewhere after being replaced by Rishabh Pant as captain. Iyer has 2375 runs in 87 matches in the IPL at an average of over 31.

Senior India batter Shikhar Dhawan might have slipped down the pecking order in the Indian team as far as T20Is are concerned, but he remains a prolific run-getter in the IPL. Dhawan has been churning out runs regularly for every team that he has played for in the league so far and enjoyed a brilliant stint for Delhi Capitals before being released this year.

Dhawan scored 587 runs in 16 matches for DC in IPL 2020 and was the fourth-highest run-getter in the tournament. The experienced opener will be in massive demand at the IPL 2022 mega auction and is expected to trigger a bidding war among teams.

The explosive young wicket-keeper batter made his India debut last year and has been impressive since. Kishan didn't have a season to remember in IPL 2021 but still managed to stay among the runs despite not getting many chances. However, his versatility as a batter who can fire as an opener, as well as in the middle-order makes him a huge asset for any team.

Kishan is also a brilliant young wicket-keeper and can also be groomed into a leadership role in the future. He is certain to draw bids from a number of teams at the IPL mega auction and get a fat pay cheque for his services.