Faf du Plessis to Ishan Kishan: 5 players who might be bought back by their IPL franchise at mega auction 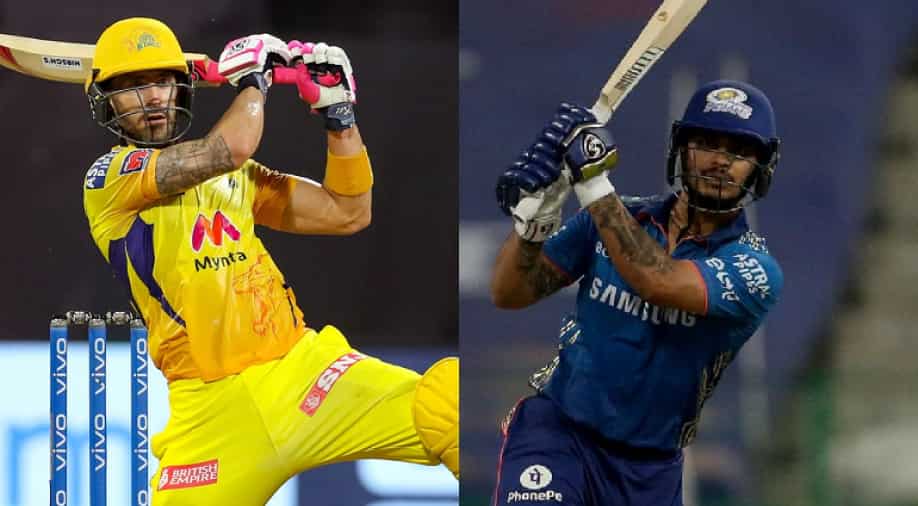 5 players who are likely to be bought back by their IPL franchises at the mega auction. | Photo - PTI/IPL | Photograph:( Others )

Ahead of the Indian Premier League (IPL) mega auction for the 2022 season, here is a look at five released players who might be bought back by their respective IPL franchise.

The countdown for the Indian Premier League (IPL) mega auction has started with the existing eight teams having revealed their final list of retained and released players. All eight teams have managed to keep some of the best players to build their squads around ahead of the 2022 season which is all set to be a ten-team affair.

While the existing eight teams have been allowed to retain a maximum of four players each, the two new teams - Ahmedabad and Lucknow can pick a maximum of three players each ahead of the mega auction from the large pool of non-retained players.

While some of the top players are already in negotiations with the two new teams and are likely to be part of a new team in IPL 2022, some players might get bought back by their respective former franchises at the mega auction. Here is a look at five players that the teams will look to buy back at the IPL mega auction.

Faf du Plessis played an instrumental role in helping Chennai Super Kings (CSK) reach the final of the IPL 2019 before inspiring them to a memorable title triumph in IPL 2021 this year. The veteran South African batter has been one of the best performers with the willow for CSK in the last few years. Du Plessis was the second-highest run-getter in the IPL 2021 with 633 runs in 16 games at an average of over 45.

Du Plessis missed out on the Orange Cap by just three runs as his opening partner Ruturaj Gaikwad finished as the top run-getter of the season with 635 runs. Du Plessis was one of the favourites to be retained by CSK, however, he was pipped by all-rounder Moeen Ali. Nonetheless, CSK are likely to go all out to get Du Plessis back at the mega auction.

The explosive young wicket-keeper batter has seen his stature grow in the past couple of years. Kishan was sensational for the four-time champions in IPL 2020 with a staggering 516 runs in 14 games at a strike rate of over 145 and a brilliant average of over 57.

Kishan made his T20I debut for India earlier this year and has been impressive in the handful of games he has played for the national team. He was one of the major contenders to be retained by the Mumbai Indians ahead of the mega auction, however, was let go of at the end with the franchise retaining Suryakumar Yadav. MI might look to buy back Kishan at the mega auction.

One of the best Indian pacers of the 2021 season, Avesh Khan was instrumental in helping Delhi Capitals reach the playoffs this year. He was the second-highest wicket-taker of the season with 24 wickets in 16 matches in IPL 2021. The Indian fast bowler is likely to be in huge demand at the mega auction and Delhi Capitals would be hoping to bring him back to the franchise ahead of IPL 2022.

One of the prominent young batting talents in the country at present, Devdutt Padikkal has been a consistent run-getter for RCB since making his debut for the franchise in IPL 2020. The left-hander notched up 473 runs in 15 games in his debut season before following it up with 411 runs in 14 matches in IPL 2021 this year. RCB were expected to keep hold of the youngster but he was surprisingly released by the franchise. RCB will be hopeful of getting him back at the mega auction.

Chennai Super Kings retained Moeen Ali while letting go of some of their prominent overseas players like Du Plessis, Dwayne Bravo and Sam Curran. While Bravo's growing age remains a concern, England star Curran can be bought back by the franchise at the mega auction. Curran did well for CSK in the last couple of years with 242 runs and 22 wickets in the last two seasons.