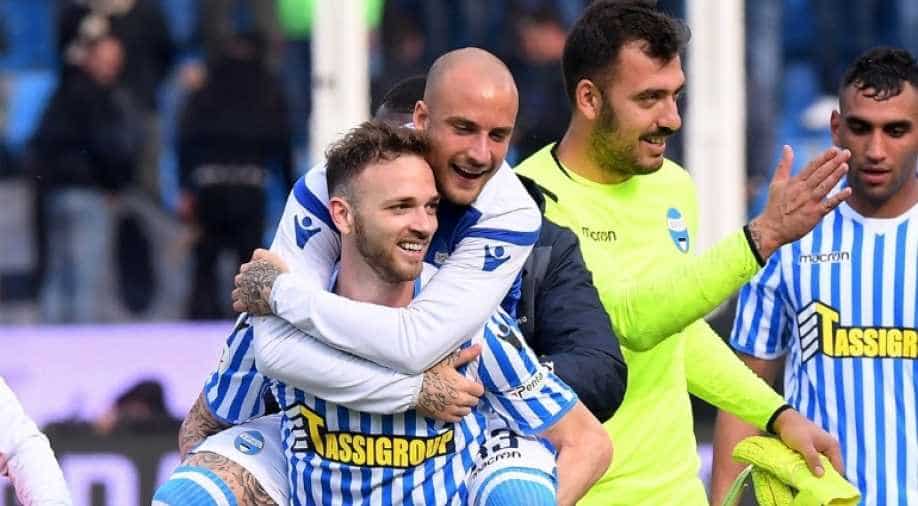 Massimiliano Allegri’s side, already on 84 points, knew a draw would be enough to wrap up the championship with six rounds remaining and took the lead in the first half through Moise Kean.

Juventus missed the chance to clinch an eighth consecutive Serie A title on Saturday as SPAL stunned them by coming from behind to win 2-1 at the Stadio Paolo Mazza, their first victory over Juve in 62 years.

Massimiliano Allegri’s side, already on 84 points, knew a draw would be enough to wrap up the championship with six rounds remaining and took the lead in the first half through Moise Kean.

However, the home side fought back after the break as goals from Kevin Bonifazi and Sergio Floccari secured their first win against the Italian champions since February 1957.

The Turin club can still be named champions this weekend if second-placed Napoli fail to win away to rock-bottom Chievo on Sunday.

Allegri stood by his decision to pick a heavily rotated side, with an eye towards Tuesday's Champions League quarter-final second leg against Ajax in Turin, after the first leg ended 1-1.

“It would’ve been easy to field the first choice XI today and get the Scudetto but we’ve had such a remarkable run of results this season that it was more important to focus on the Champions League game coming up," he told Sky Italia.

“The key to Juventus winning the Scudetto is that we do well in the head-to-head clashes but above all bring home the points everywhere else.

"You usually win the Scudetto with 84-86 points but last term Napoli had 91 –- a club record –- and still finished second, so our performance that season was extraordinary."

It was Juventus’s second defeat of the league season and they remain 20 points clear of Napoli, while SPAL have risen to 13th place on 35 points, seven clear of the relegation zone.

Andrea Barzagli and Juan Cuadrado returned for Juve after injury lay-offs, while 17-year-old defender Paolo Gozzi and midfielder Grigoris Kastanos made their Serie A debuts for the club, as did substitute Stephy Mavdidi.

“We had a lot of young players and they did well but above all the second goal showed a lack of experience,” Allegri added.

“We reacted well in the second half but couldn’t get the game back on track. Paolo Gozzi had a good game, including after Barzagli went off. Kastanos was struggling a little in the role of mezz’ala, while (Hans) Nicolussi and Mavidi did well.

“I needed to see the condition of Juan Cuadrado, who is unfortunately off the Champions League squad list, and also Dybala, whose fitness levels weren’t at their best.

"The more he plays, the better shape he gets into. He rediscovered some enthusiasm today and it wasn’t easy for him psychologically of late to have only 20 minutes or so and then get hurt again.

“At a big club, you must fight every day to earn your space in the team and I am very happy with what he did today. It’s a good sign for Tuesday, as we must be ready and prepare for the potential of extra time too."

It was 19-year-old, on-form striker Kean who caught the eye again when he put Juve in front with an instinctive finish after 29 minutes.

However, SPAL were rewarded for an impressive start to the second half when Bonifazi rose to head in his team’s equaliser from a corner.

The hosts continued to play on the front foot and were rewarded with 15 minutes remaining when Floccari raced on to a loose ball in the area and swept a finish into the corner.

It was only SPAL’s second ever win against Juventus but marked their third successive home victory after they beat Roma and Lazio.