Italy fails to qualify for next World Cup, Buffon quits 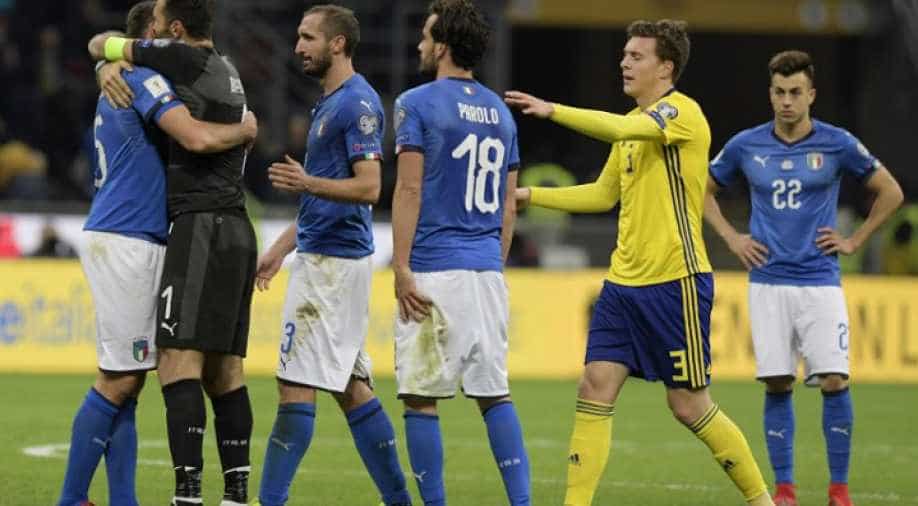 The Italian press did not take the "no show" very well, with sports daily Gazzetta dello Sport running a headline: "Italy, this is the apocalypse". ||Andrea Barzagli and midfielder Daniele de Rossi winners in 2006 also quit the game.

2006 World Champions Italy failed to qualify for next World Cup in Russia after they were held to a goalless draw by Sweden at the San Siro in Milan on Monday night.

Sweden qualified for the next World Cup with a 1-0 aggregate win.

The Italians did not enter the first World Cup in 1930 but apart from the 1958 finals in Sweden, they have played in every World Cup. This will be the first time in 60 years the football fraternity will miss the Italians at the World Cup.

The Italian show was especially bitter for the 74,000 fans at the San Siro who had come to cheer their team into the final but it was not be!

Amid the gloom, Italy goalkeeper Gianluigi Buffon, 39, capped 175-times quit the game saying: "I'm not sorry for myself but all of Italian football. We failed at something which also means something on a social level. There's regret at finishing like that, not because time passes."

"It's the only regret I have. Not stopping, because time passes and it's normal. I regret just that my final match with the national side coincides with an elimination," the legendary goalkeeper said.

"I leave a squad of talent that will have their say, including (Gianluigi) Donnarumma and (Mattia) Perin. I embrace all those who have supported me," Buffon said in the end.

"It's the biggest disappointment of my life from a sporting point of view... I can't find my words," Barzagli said.

The Italian press did not take the "no show" very well, with sports daily Gazzetta dello Sport running a headline: "Italy, this is the apocalypse".

"Wasted chances, a bit of bad luck but zero goals in 180 minutes against the Swedes, who will go to Russia," Gazzetta commented.