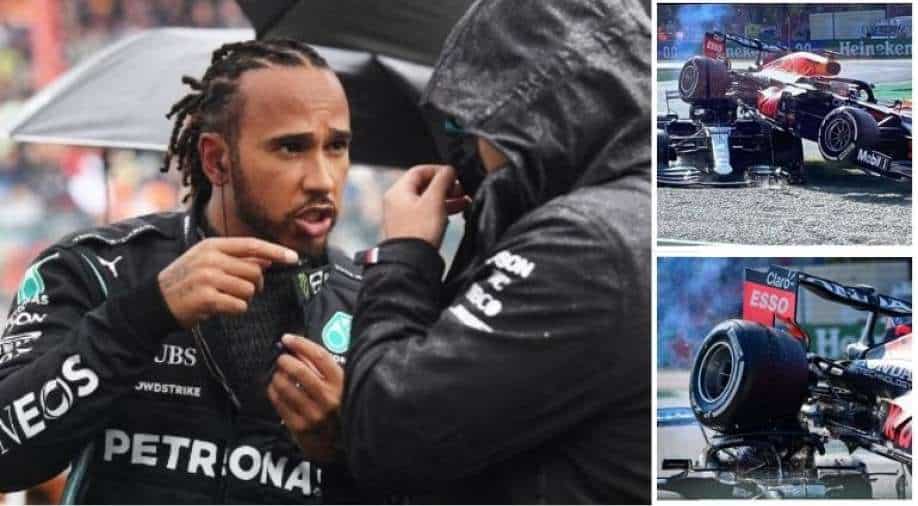 Both the racers crashed out of the Italian GP after hitting each other halfway through the race as the protective Halo device prevented a serious injury that might have happened to Hamilton.

Reigning champion Lewis Hamilton escaped a massive tragedy at the Formula One Italian Grand Prix as title rival Max Verstappen's car flew over his head after they took each other out of the race on Sunday (September 12).

Both the racers crashed out of the Italian GP after hitting each other halfway through the race as the protective Halo device prevented a serious injury that might have happened to Hamilton.

Red Bull driver Verstappen tried to dart past Hamilton just after the Briton's pit stop but ended up with his back wheel rolling over the top of his rival's Mercedes, narrowly missing Hamilton's head.

The drivers then slid into the gravel and were forced to retire from the race, which Hamilton was hoping to make his 100th Grand Prix victory.

Max Verstappen has to sometimes use his head man.
He wasn't gonna make that corner ahead of Lewis Hamilton.
I'll be surprised if there are people out here who will defend this.
Costly and stupid mistake.#ItalianGP #F1 pic.twitter.com/tEkfNw8l7k

Incredible image from the Grand Prix… without the safety ‘Halo’, that could have killed Lewis Hamilton. pic.twitter.com/lBU8PppSEs

Horner: "make sure you finish on top of Hamilton max" #ItalianGP pic.twitter.com/1kPOL2pIEI

After the incident, Verstappen took to his official Twitter as he wrote, "Today was very unfortunate. The incident could have been avoided if I had been left enough space to make the corner. You need 2 people to make that work and I feel I was squeezed out of it. When racing each other, these things can happen, unfortunately"

As far as the race is concerned, Daniel Ricciardo won it and he was followed by his McLaren teammate Lando Norris in the British team's first win since the 2012 Brazilian GP, while Valtteri Bottas will take third despite starting in last place due to a five-second time penalty for Sergio Perez.

The Honey Badger is back, baby! 😃#ItalianGP 🇮🇹 @danielricciardo pic.twitter.com/rzu3iHif8u

IND vs AUS 2023: Mitchell Starc ruled out of 1st Test against India in Nagpur