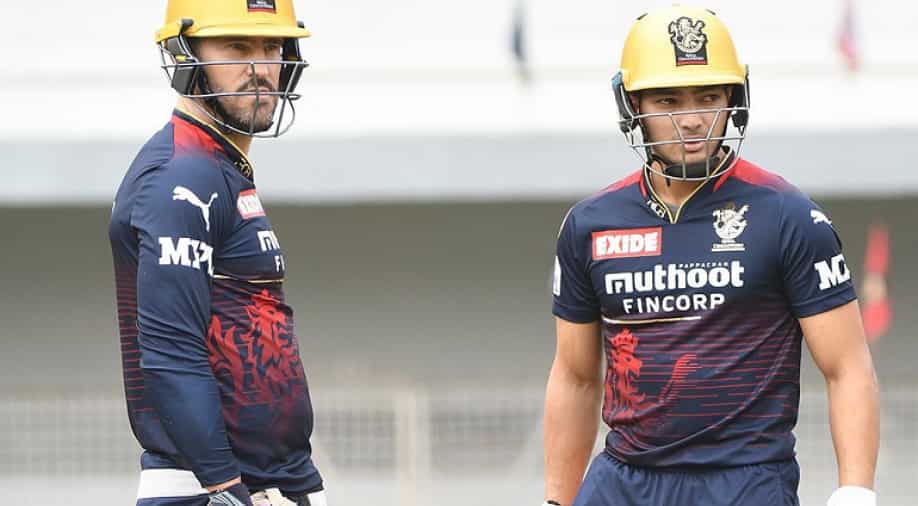 Who will open the batting with Faf du Plessis for RCB? | @RCBTweets | Photograph:( Twitter )

Virat Kohli will be playing his first game as a pure batter under a new captain since 2013 for RCB when the team locks horns with Punjab Kings in their first game of IPL 2022 on Sunday.

Royal Challengers Bangalore (RCB) will embark on a new era under their new captain Faf du Plessis when they lock horns with Punjab Kings (PBKS) in their opening game of the Indian Premier League (IPL) 2022 season on Sunday (March 27). RCB will take on PBKS at the DY Patil Stadium in Mumbai and will be hoping to get off to a winning start.

RCB are one of the six teams who have been part of all 15 seasons since the inception of the IPL in 2008 but are yet to win the league. RCB were a force to reckon with under former captain Kohli but failed to lift their maiden IPL title. Kohli led RCB in a total of 140 matches before stepping down as captain following the conclusion of IPL 2021 last year.

Kohli was replaced by veteran batter and former South Africa skipper Faf du Plessis as the captain of the side. RCB roped in Du Plessis for a sum of Rs 7 crore (INR 70 million) at the IPL 2022 mega auction last month after his stellar season for his former side Chennai Super Kings (CSK) last year. Du Plessis was the second-highest run-getter in IPL 2021 and played an instrumental role in CSK's memorable title-winning campaign.

RCB will be hoping for a change in fortunes under the leadership of Du Plessis, who is an experienced campaigner in the IPL and has won the trophy twice with CSK. Kohli will be playing his first game under Faf as a player against Punjab Kings on Sunday.

While many have urged Kohli to open the innings with new skipper Du Plessis, the former captain is unlikely to bat on top of the order in the absence of all-rounder Glenn Maxwell as it leaves RCB thin in the middle-order. Du Plessis might open the batting with youngster Anuj Rawat with Kohli coming out at his usual no.3 spot.

Maxwell is likely to miss the first few games of the season for RCB and in his absence, Kohli will have to shoulder the run-scoring responsibilities in the middle-order. Dinesh Karthik will also have to play a key role for the franchise as a finisher. RCB paid huge money for Sri Lankan all-rounder Wanindu Hasaranga in the auction and he is likely to feature in the playing XI.

Along with Hasarnaga, RCB might also play two other overseas all-rounders in the form of Sherfane Rutherford and David Willey to further strengthen their bowling attack and bat deep. Harshal Patel will continue to lead the pace attack along with the likes of Mohammed Siraj and Akash Deep.