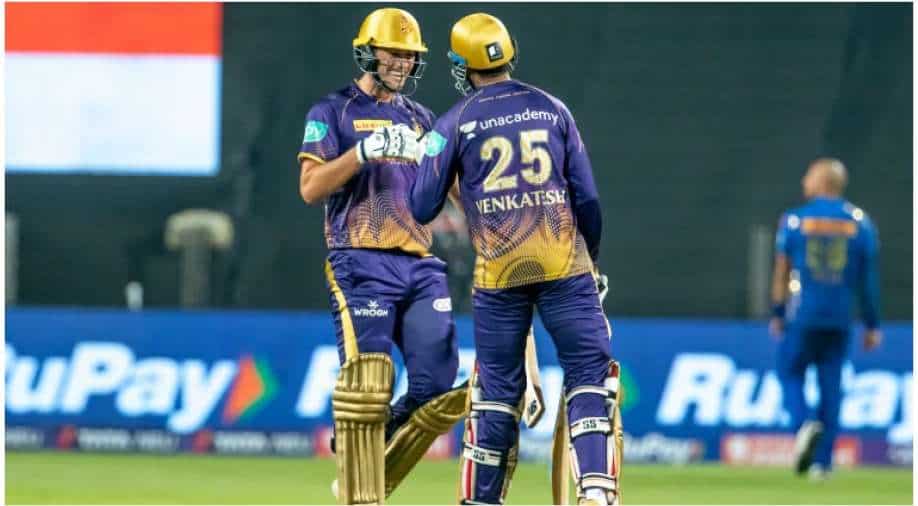 IPL 2022: Pat Cummins' joint-fastest IPL fifty, coming at par with KL Rahul, ended the match in the 16th over to guide the two-time winners KKR to a 5-wicket win versus MI.

Match 14 of the IPL 2022 edition saw the five-time winners Rohit Sharma-led Mumbai Indians (MI) lock horns with the Kolkata Knight Riders (KKR) at the Maharashtra Cricket Association Stadium, Pune on Wednesday evening (April 06). Facing the Shreyas Iyer-led KKR outfit with no win after their first two games in the 15th season, MI had their back against the wall but ran into Pat Cummins' mouth-watering 15-ball 56* and Venkatesh Iyer's 41-ball 50 to lose their third game on the trot.

Opting to bowl first, Iyer & Co. started off with a bang. Umesh Yadav, KKR's in-form pacer, started off sharply whereas debutant Rasikh Salam also kept it tight with the ball. As a result, captain Rohit Sharma fell for an uninspiring 12-ball 3. Ishan Kishan, who had two successive fifties so far, also failed to get going on a sticky wicket. He hung around for a bit before departing for a 21-ball 14. Dewald Brevis, baby AB de Villiers, looked good in his brief stay on his maiden appearance before returning for a good-looking 19-ball 29, at 152.63.

From thereon, MI's recovery took place as Suryakumar Yadav and Tilak Verma led the counterattack. The duo stitched a vital 83-run fourth-wicket stand to rescue the Mumbai Paltan. SKY, playing his first-ever game of the season, looked in sublime form and upped the ante effortlessly. He returned with a stunning 36-ball 52, at 144.44, before Tilak's 38* and Kieron Pollard's 5-ball 22 not out propelled MI to 161-4 in 20 overs.

In reply, KKR started slowly and steadily and were 67 for 3 at the halfway stage. While Venky Iyer held one end, he lost partners at regular intervals with plenty left to do. Murugan Ashwin and Tymal Mills struck regularly to keep MI in the hunt before they were blown away by Cummins' storm.

ALSO READ | IPL 2022: Suryakumar lights up the atmosphere with a glorious upper-cut six during MI vs KKR clash - WATCH

Cummins came out to bat at No. 7 and took the game away from the opposition from the word go. Replacing Andre Russell in the middle, the Aussie all-rounder -- also playing his first game in this edition -- went berserk to slam the MI bowlers left, right and centre. He took on Jasprit Bumrah, Mills and slammed Daniel Sams for as many as 35 runs in the 16th over to finish off the proceedings in style. Before his 35-run over, Sams had figures of 1 for 15 in two overs.

Thus, Cummins' joint-fastest IPL fifty, coming at par with KL Rahul, ended the match in the 16th over to guide the two-time winners to a 5-wicket win.

With this, KKR top the points table whereas MI are at the penultimate position with three back-to-back defeats.