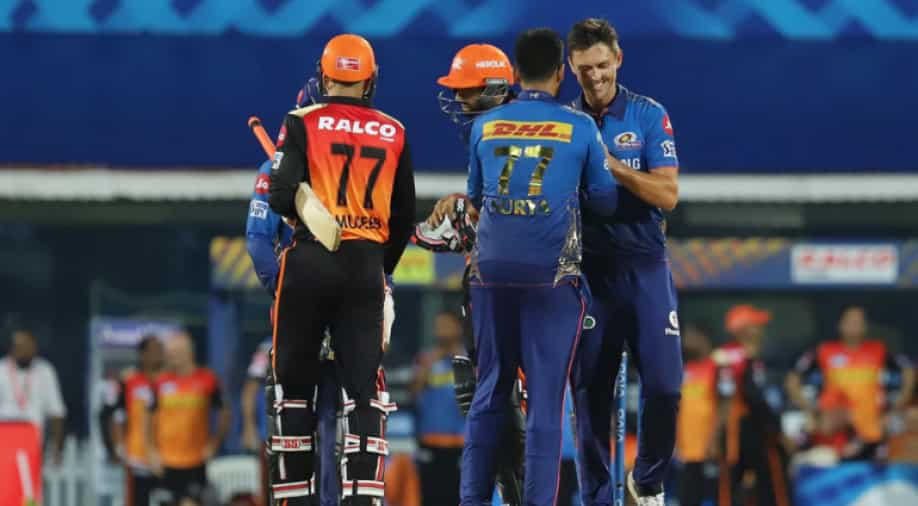 The IPL 2021 game among KKR and RCB, which was scheduled to be played on Monday, got deferred after two players from the Kolkata Knight Riders squad tested positive for COVID-19. Nonetheless, the BCCI said that the competition would proceed and that there wouldn't be any other fixture deferments. Thus, the clash between the Sunrisers Hyderabad and the Mumbai Indians should happen as planned at the Arun Jaitley Stadium in Delhi.

The forthcoming clash between MI and SRH will be the second time these two teams challenge in the IPL 2021. Mumbai and Hyderabad played against one another at the MA Chidambaram Stadium recently, where the Mumbai Indians beat the Sunrisers Hyderabad by 13 runs.

The Sunrisers management got a great deal of fire from angry fans after David Warner was sacked as skipper and sidelined for their game against Rajasthan Royals. Kane Williamson's strategy of utilizing Rashid Khan in the powerplay and bowling him out by the eleventh over misfired. Mohammad Nabi, who supplanted David Warner, was given only one over with the ball and it came past the point of no return in the game to have any effect.

Jason Holder can open the bowling for Sunrisers Hyderabad, and subsequently open up space for a spinner/all-rounder in the line-up. He can likewise be advanced up the order and help the team to get some speedy runs in attempting conditions.

SRH's genuine misery lies in their middle-order who hasn't had the option to get rolling in the league. Kedar Jadhav, Virat Singh, Abhishek Sharma, and Vijay Shankar have all neglected to perform up to expectations. SRH should take a gander at giving Priyam Garg a chance that can solve the middle-order conundrum.

Mumbai Indians haven't consistently rolled out an excessive number of changes in the previous few seasons, yet they have dabbled with their group a smidgen in IPL 2021 as per the conditions. Piyush Chawla could come in for Dhawal Kulkarni and Nathan Coulter-Nile could return the spot of Jimmy Neesham.

Quinton de Kock has scored 108 runs in two matches at Arun Jaitley Stadium this year. The Mumbai Indians opener scored a 50-ball 70 against the Royals and followed it up with a 38-run thump versus the Super Kings.

Kieron Pollard is the solitary Mumbai Indians batsman to store up more than 400 runs against the Orange Army, while Jasprit Bumrah has dismissed 13 Sunrisers Hyderabad hitters in his vocation. Kieron Pollard and Jasprit Bumrah will be the players to keep an eye out for in this game.

There have been four matches played at the Arun Jaitley Stadium in Delhi so far this season and the pitch is by all accounts good for batting, yet it will be captivating to perceive how the Sunrisers' out-of-form batting line-up can emerge from their droop will Mumbai be in any genuine peril of coming next on the evening.

IPL 2021: 'Cricket is the only source of my earning': Chetan Sakariya