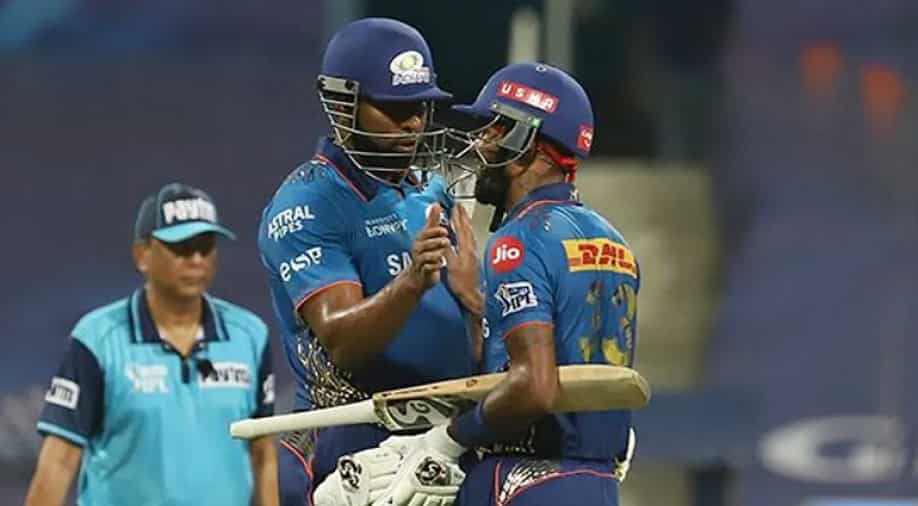 Hardik Pandya and Sourabh Tiwary starred for Mumbai Indians as the Rohit Sharma-led side defeated Punjab Kings in IPL 2021 on Tuesday.

Hardik Pandya finally showed glimpses of his destructive self as he brought Mumbai Indians back in play-off contention with the defending champions beat Punjab Kings by six wickets in an IPL encounter on Tuesday. Hardik smashed two fours and a six in the penultimate over bowled by Mohammed Shami as his 40 not out off 30 balls saw MI snap a three-match losing streak successfully chasing down a target of 136 in 19 overs.

Saurabh Tiwary (45 off 37) and Kieron Pollard (15 not out) also played their part as M survived some anxious moments before ending on a winning note.

Pollard who took two wickets in the Punjab innings hit a six and four off young left-armer Arshdeep Singh taking 13 off the 18th over which helped Hardik go for the jugular against Shami. It only helped that his final shot which ended as a maximum was a regulation catch that Deepak Hooda dropped at the fence.

After this victory, MI reached the fifth spot with 10 points from 11 matches, while Punjab slipped to sixth spot.
Defending the total, leg-spinner Ravi Bishnoi got rid of Rohit Sharma (8) and Suryakumar Yadav (0) in successive deliveries to leave MI toterring at 16 for two.

Tiwary and Quinton de Kock (27) took the team to 30 for 2 in the powerplay. Tiwary eased the pressure with a boundary at the cover-point area, before picking up another four off Nathan Ellis.

Dropped by Aiden Markram at the boundary line in 8th over, Tiwary danced down the wicket and deposited Harpreet over mid-wicket for a maximum to bring up the 50. De Kock, who was looking good, lost his bearing in the 10th over as he dragged one on to his stumps, immediately after pulling Mohammed Shami for a four as MI slumped to 62 for 3.

Tiwary and Hardik Pandya kept MI in hunt but runs dried up with Arshdeep Singh taking the pace off but Harpreet dropped the India allrounder to add to his frustration.

Needing 52 off 36, Tiwary clobbered Bishnoi over mid-wicket but he was soon removed by Nathan Ellis.
Hardik then unleashed a four and six in two balls off Shami to keep MI in the hunt.

Earlier, Markram shared a 61-run partnership with Deepak Hooda (28) to lift their score after they were reduced to 48 for 4 in 7.3 overs. However, once the South African was back in the hut in the 16th over, Punjab couldn't score a single boundary, managing a meagre 23 runs in the last four overs.

Pollard (2/8) and Bumrah (2/24) were the pick of the bowlers but they were supported well by Krunal Pandya (1/24), Rahul Chahar (1/27) and Nathan Coulter-Nile (0/19). Earlier, Mandeep Singh (15) was the first to go as Krunal Pandya dealt the first blow. Pollard then removed Chris Gayle.

Two balls later, Pollard picked up Rahul for his 300th wicket in T20s after the batsman pulled a short of length delivery straight to Bumrah at short fine leg. Bumrah then produced his famous dipping yorker to trap Nicholas Pooran in front of wicket as Punjab slipped to 48 for four in 8th over.

Markram and Hooda then kept the scoreboard ticking, picking up singles of Chahar and occassional boundaries to take Punjab to 90 for 4 in 14 overs. Punjab never got the momentum going as new man Harpreet Brar struggled to negotiate the variations of Bumrah and Coulter-Nile in the death overs.

Hooda, in desperation, then sent one up in the air only to be caught by Pollard as PBKS ended with a below-par score.