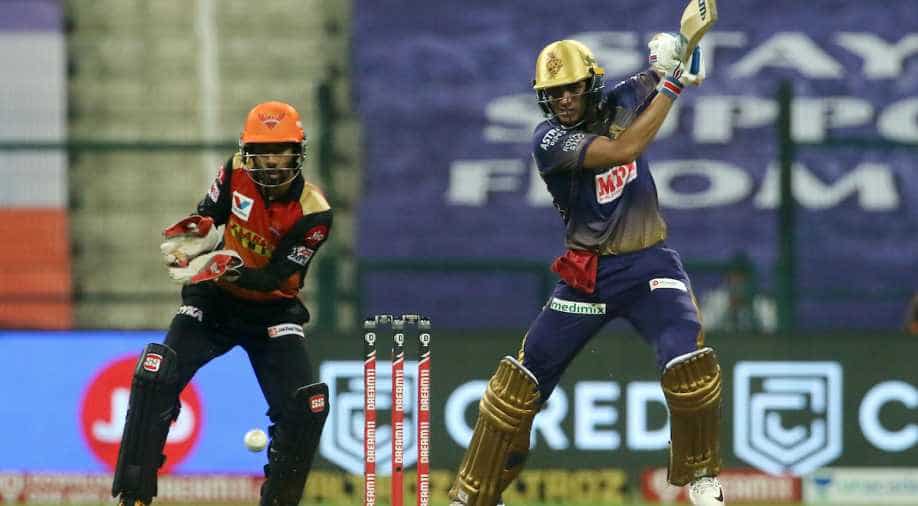 Shubman Gill scored 70 unbeaten off 62 deliveries to help KKR seal their first win in IPL 2020 as the Dinesh Karthik-led outfit chased 143-run target comfortably. Gill, with his unbeaten knock, broke a plethora of records as the youngster continued to impress with the bat.

Shubman Gill was the star for Kolkata Knight Riders (KKR) in their thumping win over Sunrisers Hyderabad (SRH) in Abu Dhabi as the action in Indian Premier League (IPL) 2020 continued in the UAE. Gill scored 70 unbeaten off 62 deliveries to help KKR seal their first win in IPL 2020 as the Dinesh Karthik-led outfit chased 143-run target comfortably. Gill, with his unbeaten knock, broke a plethora of records as the youngster continued to impress with the bat.

Gill recorded a timing rating of 195, according to Cricviz Data – the highest-ever in IPL. Gill surpassed the likes of Hashim Amla (171), Rishabh Pant (163) and Kane Williamson (150) among others as the youngster comfortably paced his innings as per the situation of the game.

Shubman Gill's Timing Rating ticks up to 195. This graph provides context as to how good that is relative to other elite timers in the IPL. His rating is 14% higher than Amla's. The Rating is based on the quality of contact given the shot played by the batsman. #IPL2020 #KKRvSRH pic.twitter.com/3SH8QGO7zD

Moreover, Gill’s 70 unbeaten is the fourth-highest score in T20 cricket with no false shots. AB de Villiers’ blistering 100 not-out off 50 balls for Rangpur in 2018 remains top of the list. However, Gill’s innings where he faced 62 deliveries, became the longest innings in T20 history to not include a false shot as the youngster didn’t edge or miss even a single delivery.

The record Gill does take home however, is the longest innings in T20 history (where shot type data is available) to not include a false shot. He faced 62 balls and didn't edge or miss a single one. #KKRvSRH #IPL2020

Gill looked comfortable against the pacers while dominating the likes of Rashid Khan and Mohammad Nabi with ease. The highly-rated youngster was happy ticking Rashid and Nabi to long off and long on as the SRH bowlers failed to mount any pressure on KKR despite the early dismissal of opener Sunil Narine.

England limited-overs captain Eoin Morgan, who stitched an important partnership with Gill to take KKR over the winning line was all praise for the youngster as the southpaw said he is “beautiful to watch and deserves all the success.

“I didn’t have to tell him a great deal to be honest, he’s beautiful to watch on the eye, good bat swing, very languid style, magnificent to watch, he’s a good kid, very hungry to learn and I would love to bat with him once again. I think he deserves all the success,” Morgan said about Gill after the match.