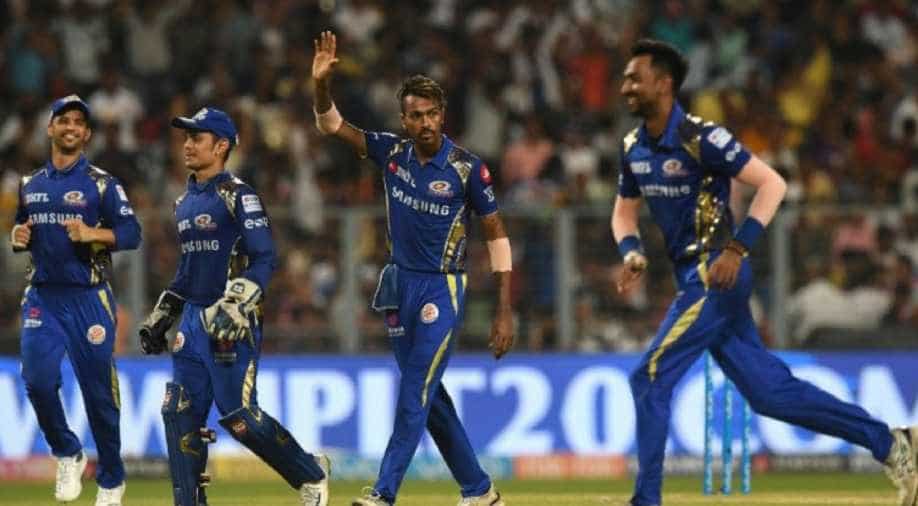 Kolkata collapsed for just 108 runs while chasing a mammoth target of 211 set by Mumbai on Thursday.

A couple of run-outs and a few poor shots got Kolkata into deep trouble.

Chris Lynn and Nitish Rana became the top scorers by contributing 21 runs each.

The rest of the team gave away their wickets after playing a few poor shots.

Openers Suryakumar Yadav and Evin Lewis gave their team a decent start with the two establishing a partnership of 46 runs before Lewis gave away his wicket to Piyush Chawla.

Chawal struck again from his team to dismiss Yadav at 36 runs.

Skipper Rohit Sharma also contributed 36 runs off 31 balls before giving away his wicket to Prasidh Krishna.

Earlier, Kolkata skipper Dinesh Karthik on Wednesday won the toss and opted to field against Mumbai.

In their previous encounter, Mumbai won the last game by 13 runs.

Mumbai were on the verge of falling by the wayside after a series of defeat before they managed to pull through in the previous two games.

"We would have bowled first as well. But we are batting now, the last time we played against these guys in Mumbai we posted a decent total. Nothing changes for us and we'll try to do the same against them tonight," Rohit said.

"I think we are playing with the same squad as it's important to back the guys. We have been playing some good cricket of late and hope to come up with a good performance again," he added.

Against Punjab, it was a Rohit and Krunal Pandya blitz that kept them alive in the play-off competition. A challenging 181/4 coupled with well-directed short balls during Kolkata's chase helped Mumbai stay afloat.

Kolkata, on the other hand, were not at full strength against Mumbai in their away game, with young pacer Shivam Mavi's injured finger joining the team's long list of injuries this season.

Talking about their strategy for today, Karthik said, "We are gonna bowl first. It's a good wicket to bat on. Will remain the same. We thought we'll make use of it second time."

"That was a team of the past (about the record against MI). We are starting fresh and we have new set of boys. We are two good teams and we expect a good match. We have two changes, Shubman Gill is injured and Rinku Singh comes in. Tom Curran is in for Mitchell Johnson," he added.