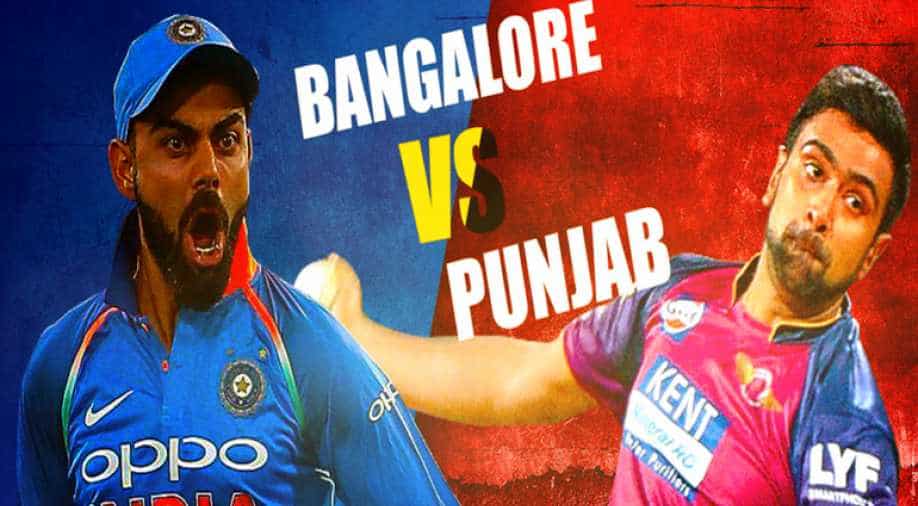 After facing a defeat by Kolkata in their last match, Punjab will host Virat Kohli-led Bangalore at the Holkar Cricket Stadium, Indore on Monday.

R Ashwin-led team faced a setback when they fell 31 runs short while chasing a mammoth target of 246 runs set by Kolkata.

Despite losses, the franchise is in the top half of the league with 12 points while Bangalore are still languishing at the second last place in the table.

Kohli-led side brought their campaign back on track after they defeated Delhi by five wickets with both AB De Villiers and Virat Kohli smashing a half-century each.

The two established a 118-run partnership to help the team recover from the early loses as both openers fell cheaply.

Both the teams are overly dependent on their batting with Kohli and De Villiers holding the fort for the Bangalore while Punjab outfit looks up to KL Rahul and Chris Gayle for a great score.

Despite blowing 'hot and cold' throughout the season, skipper kohli is team's top scorer by a distance with 466 runs from 11 games.

De Villiers has made 358 runs so far and is just 108 runs behind his skipper.

For Punjab, Rahul has been in a different league with five half-centuries and a strike-rate of 162 plus and an average of nearly 60.

Rahul will be desperate to get some support from Gayle, who has gone quiet after the initial carnage.

However, it is the bowling which has let both the teams down on many occasions.

The problem area has been skipper R Ashwin's inability to get breakthroughs with only six scalps from 11 games at 8.13 runs per over.

The next specialist bowler who got to play more than five games is Mohammed Siraj (8 wickets from 8 games at an economy rate of 9.13).

With a high dependence on batting, Ashwin will hope to get his team back on track by defeating Bangalore.