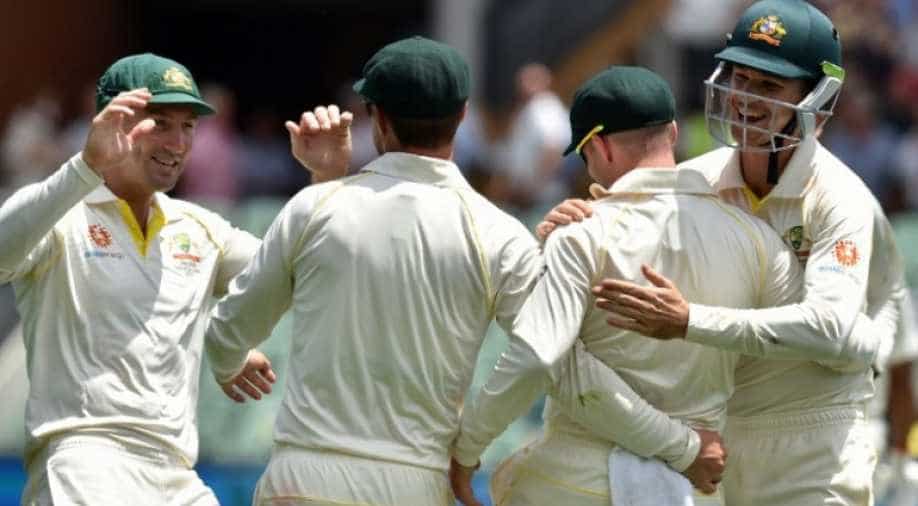 Cheteshwar Pujara scored a half-century to salvage Indian innings in the opening Test on Thursday in Adelaide as the visitors were at stumbled at 214-8 after 83 overs.

Pujara played a responsible innings and was unbeaten at 73 after facing 194 balls.

He found a determined ally in R Ashwin, who lost his wicket after scoring a crucial 25 runs for his team.

For Australia, spinner Nathan Lyon struck twice to expose India's tail as the Virat-led staggered to 143 for six at tea.

Having won the toss and elected to bat, India resumed after lunch on 56 for four after a disastrous morning of batsmen falling to Australia's pacemen with a slew of poor shots.

Pujara and Rohit Sharma, recalled at the expense of Hanuma Vihari, were pinned down after the break by disciplined bowling and the latter tried to break the shackles by attacking Lyon.

He walks back for a 76-ball 25, and Australia have the breakthrough. Ashwin's 62-run stand with Pujara is by far India's best on the day.

He slog-swept the spinner for six but it was a risky play as debutant Marcus Harris leaped to catch the ball just behind the rope before tossing it back inside in a failed bid to save runs.

Rohit was out next ball with another ham-fisted attempt to clear the short square boundary, skying a simple catch to the same fielder after Lyon had pitched the ball shorter.

Rishabh Pant was greeted with fierce pace from Mitchell Starc, who beat the young wicketkeeper's bat twice in succession and followed up the deliveries with verbal assaults.

He responded in turn by smashing Starc for six behind square to bring up India's 100th run and then sent an edge flying past the slips for four.

He's been the lone positive for India so far on the first day of the Adelaide Test.

Before that, Australia grabbed early wickets, including the prized scalp of star batsman Virat Kohli, to have India on the ropes.

On a day when temperatures are forecast to hit 39 Celsius (102 Fahrenheit), the visitors crumbled under an opening barrage from quicks Mitchell Starc, Josh Hazlewood and Pat Cummins.