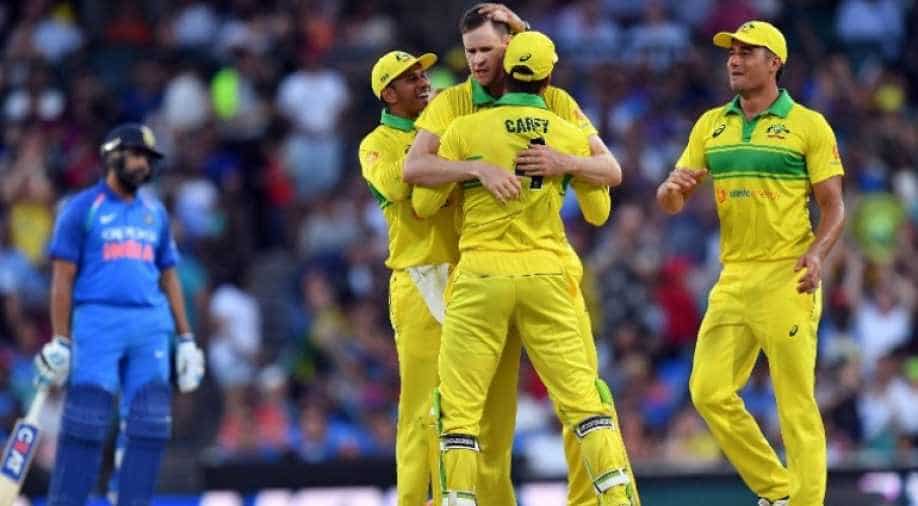 Rohit Sharma blasted 133 off 129 balls in a brave effort to keep India in the contest, while Jhye Richardson took four for 26 for Australia.

Australia defeated India in the first one-day match of a three-match series by 34 runs at Sydney Cricket Ground on Saturday.

After winning the toss, Australian skipper Aaron Finch elected to bat and piled up a 288-run target for team India.

Chasing the massive total, India lost three quick wickets within five overs and opener Shikhar Dhawan along with skipper Virat Kohli and Ambati Rayudu were sent back to the pavilion by Australia pace attack.

Rohit Sharma, who found a determined ally in former skipper MS Dhoni, blasted 133 off 129 balls in a brave effort to keep India in the contest while playing under pressure.

While his career's 22nd ODI century went in vain as India ended up losing at SCG.

"I am very happy to get (Kohli's) wicket, I'll treasure it for a while but more than that, I'm happy with the win. As a bowling unit, we are clear about our plans, doing our homework and research, being professional out there," said Richardson.

Three of India's top four batsmen could not reach double-digit and lasted a mere 11 balls.

Debutant Jason Behrendorff broke the partnership by sending back Dhoni, who became only the fifth Indian batsman to complete 10,000 runs in ODI cricket during the course of his knock that came off 96 balls.

Dhoni, who has been criticised for his poor batting form, hit a half-century.

The Jhye Richardson-led bowling attack powers Australia to a comprehensive 34-run win over India in the first ODI at the SCG.#AUSvIND SCORECARD ⬇️https://t.co/cJ0yJS6W8v pic.twitter.com/vWipnuIWKA

While speaking at the presentation ceremony, Virat said, "We are not very pleased with the way we played. I think it was a 300+ wicket. We thought 280 was chaseable."

He praised Rohit Sharma's effort, saying, "Rohit was outstanding and MS supported him well. They took the game deep, MS got out at the wrong time. If we would have had one more partnership, we would have been close."

The Australians have won just three of their last 24 ODIs.

In the first innings, Peter Handscomb top-scored with 73 off 61 balls. Three batsmen reached half-centuries but Handscomb, passed over this week by selectors for this month's two Tests against Sri Lanka, led the board with six fours and two sixes.

Skipper Aaron Finch fell for six in the third over when he was bowled by Kumar for the paceman's 100th ODI wicket.

Alex Carey fell in Kuldeep's first over when he attempted to cut the leg-spinner, only to get an outside edge to Rohit Sharma at slip for 24 off 31 balls.

The next match is at Adelaide Oval on January 15.

Khawaja and Marsh put on 92 runs for the third wicket before Khawaja was out leg before wicket to spinner Ravindra Jadeja for 59 in the 29th over.

Khawaja was struck on the front pad while attempting to sweep and sought a review but there was no 'hot spot' detected off the bat.

Marsh look well set before he holed out to Mohammed Shami off Kuldeep at long on, ending a 53-run stand with Handscomb, who later found Shikhar Dhawan at extra cover off Kumar.