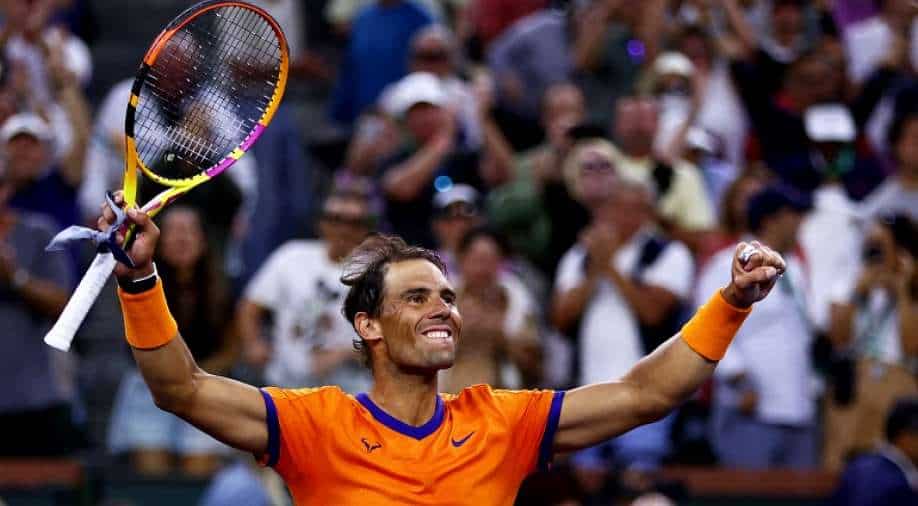 The 35-year-old Spaniard will face 20th seeded Taylor Fritz from America in the final. Photograph:( AFP )

World No.4 Rafael Nadal beats compatriot Carlos Alcaraz 6-4, 4-6, 6-3 in the semi-final that lasted for three hours and 12 minutes to extend his year's unbeaten streak to 20 matches and set up a final clash with American Taylor Fritz here at the Indian Wells.

The 21-time grand slam champion Nadal won the opening set 6-4 to go one set up but the 18-year-old Alcaraz turned it around in the second set to win it with a similar scoreline as the first set to make it one set apiece and the match went to the decider where the experience of Nadal proved to be handy as he clinched the third and final set 6-3.

Nadal's win over Alcaraz was his 954th on outdoor courts, becoming the most successful player in the Open era and breaking Roger Federer's record on 953.

The reigning Australian Open champion will be playing his 53rd Masters 1000 final.

Nadal is also just one win away from equalling Novak Djokovic's record of 37 ATP Masters 1000 titles.

The 24-year old Fritz will be aiming to become the first American men's champion at Indian Wells since Andre Agassi in 2001.