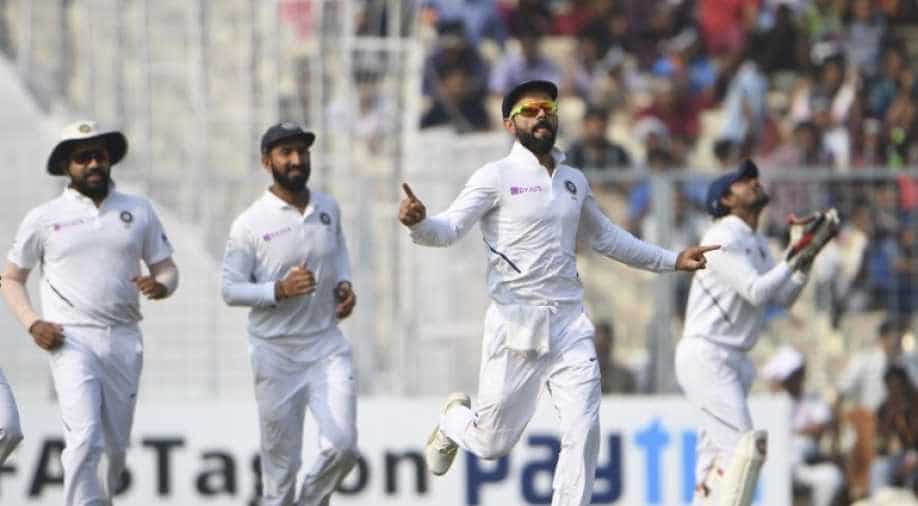 Bangladesh could add only 43 runs from their overnight score and end up with 195 runs which gave India a win by an innings.

Number 1 ranked India did not waste much time on the third day of the second Test to clean sweep two-match series by an innings and 46 runs. This is India's seventh consecutive Test win, best-ever winning streak and 12th successive home series victory.

This was the first day-night Test played by either of the teams with the pink ball.

Indian captain Virat Kohli showered praise on his fast bowlers in the post-match presentation ceremony, saying that the way the pacers are bowling, they can take wicket anywhere.

Earlier on day 3 at Eden Gardens in Kolkata, the visitors could add only 43 runs in their overnight score to end with 195 runs as Umesh Yadav didn't waste much time to dismiss the remaining batsmen. In doing so, Yadav claimed a five-wicket-haul.

Mushfiqur Rahim scored most runs for the visitors in the second innings (74).

Earlier, skipper Kohli's spectacular 137 and fifties by Ajinkya Rahane and Cheteshwar Pujara ensured that India declared on 347 runs. In the first innings, Bangladesh could manage only 106 runs as Sharma-led pace attack didn't provide visitors any opportunity to fight back.

Bangladesh lost the first match too with an innings. Acknowledging the team's disappointing performance, Bangladesh captain Mominul Haque said that the gap between the two teams is "concerning".

Rising star Mayank Agarwal was the highest run-getter in the series, scoring 257 runs at an average of 128.5.

With the series win, team India broke a host of records, including becoming the first team to win four successive Tests by an innings. With 33rd win in Tests, Kohli surpassed former Australian captain Alain Border and grabbed the fifth spot in the list of most Test wins.

Indian pacers also registered their best-ever performance at home by hunting 19 out of the 20 wickets.

India won the first Test too within three days before claiming the T20 series 2-1 against Bangladesh.