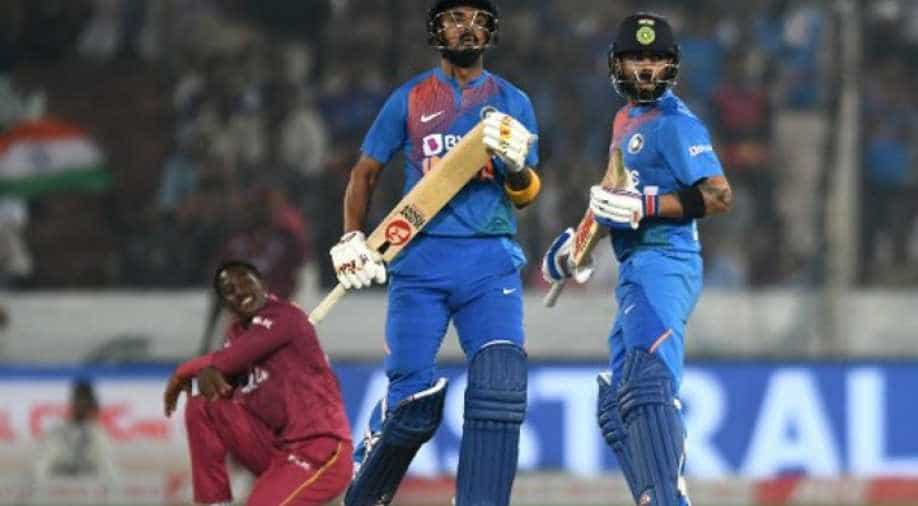 Four Indian bowlers finished with two wickets as West Indies ended their innings at 173 for 8.

India clinched the T20 series against reigning world  champions West Indies after handing the visitors a 67 run trashing in the 3rd and decider match -courtesy of a stunning batting display.

West Indies skipper Keiron Pollard won the toss and had no hesitation in bowling - hoping to take advantage of India's recent inability to post big totals while batting first.

But the hosts went on to produce an absolute masterclass at the Wankhede stadium.

Sharma was dismissed for a 34 ball 71 and skipper Virat Kohli  then took over as the chief aggressor for the second half of the innings.

Rahul struck 9 fours and 4 sixes in his knock of 91, while Kohli finished not out on 70 from just 29 deliveries to take India to 240- their third highest total in T20 Internattonals.

That chase was always going to be a daunting task and the Windies crumbled under pressure,  falling to 17 for 3 inside four overs.

Shimron Hetmyer struck a few big hits and pollard entertained the crowd with his 38 ball 68, but the Windies were never really in contention.

Four Indian bowlers finished with two wickets as West Indies ended their innings at 173 for 8.

Kohli- who scored 183 runs in the three games- was named man of the series.