India loses 4 wickets in quick succession, are 164/8 after 70 overs 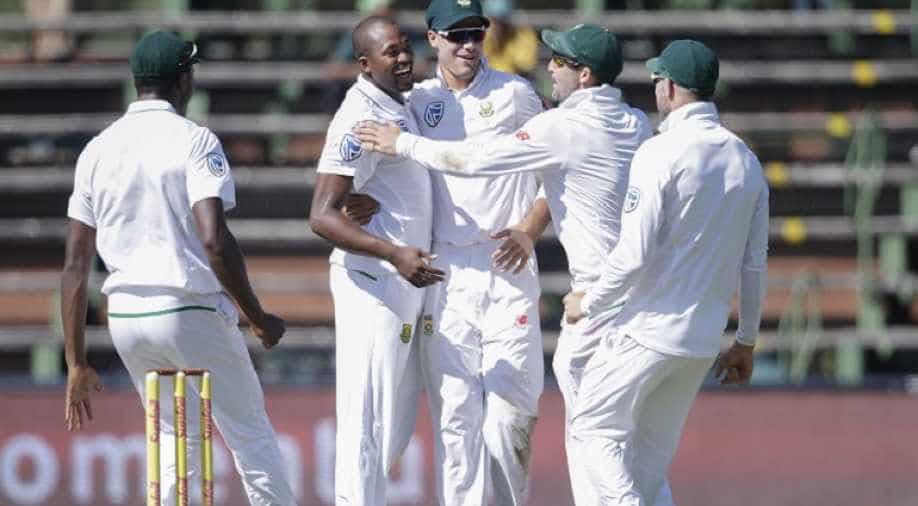 After Virat Kohli's wicket, Pujara continued to hold the team and stood firm in front of the pace attack. Photograph:( AFP )

Indian batting line once again fell prey to South African pacers, with men in blue losing four wickets in quick succession on the Day 1 of the third and final Test match.

After Virat Kohli's wicket, Pujara continued to hold the team stood firm in front of the pace attack.

However, after reaching his half-century, Pujara was sent back to the pavilion by Phehlukwayo at 50.

Since then the wickets started to fall.

After 70 overs, India's score stands at 164 for the loss of eight wickets.

Ajinkya Rahane, who was roped in seeing his overseas performance, did not stand up to the expectations and was out on 9.

Parthiv Patel also went back for 2. All-rounder Ajinkya Rahane did not even open his account and was caught out by Phehlukwayo.

Virat Kohli, who once again kept India afloat against South Africa on Day 1 after the openers failed to contribute anything, smashed a gritty 54 runs off 106 balls to reach his 16th Test half-century.

However, the right-handed batsman was caught out by AB de Villiers of Lungi Ngidi, soon after his century.

Opener M Vijay once again got off to a wrong start with Vernon Philander striking early.

Whereas, KL Rahul once again touched a ball that was pitched slightly outside off and gave an easy catch behind the wickets to Quinton de Kock.