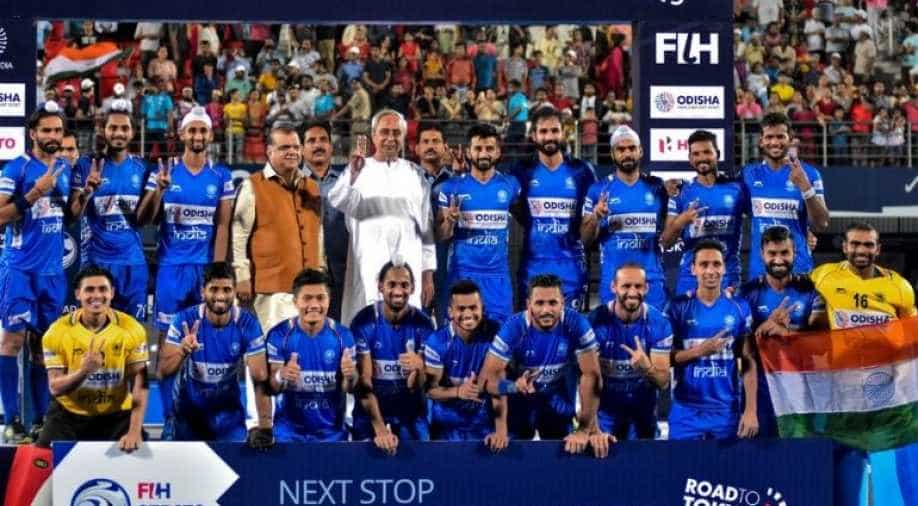 world no. 5 India played like champions and remained unbeaten throughout the tournament

India lived up to their billing and thrashed South Africa 5-1 in the summit clash to win the FIH Series Finals hockey tournament here Saturday.

Coming into the tournament as overwhelming favourites, world no. 5 India played like champions and remained unbeaten throughout the tournament.

Dragflickers Varun Kumar (2nd and 49th minutes) and Harmanpreet Singh (11th and 25th) scored a brace each, while Vivek Sagar Prasad (35th) was the other goal scorer for India.

South Africa's lone goal was scored by Richard Pautz in the 53rd minute.

India and South Africa have already qualified for the final round of the Olympic qualifiers before Saturday's summit clash.

Earlier in the day, Asian Games champion Japan defeated USA 4-2 to finish third in the competition.

The top two finishers of this tournament make it to the final round of the Olympic qualifiers to be held later this year.

Going by world rankings, the Indians were expected to control the proceedings and they exactly did that from the word go.

India secured their first penalty corner as early as in the second minute and Varun made no mistake in converting the opportunity into goal.

In the 11th minute, India got another penalty corner and this time Harmanpreet slammed home to make the scoreline 2-0 in favour of the hosts.

Seconds before the end of the first quarter, South Africa got a rare opportunity but Nqobile Ntuli's reverse hit was kept away by Krishan Bahadur Pathak in front of the Indian goal.

Five minutes from half time, India were awarded a penalty stroke when Birendra Lakra was stick-checked inside South Africa's 'D' by Jethro Eustice and Harmanpreet made no mistake to make the scoreline 3-0.

The flow of the match continued in the same vein after the change of ends with India dominating the proceedings.

Five minutes into the third quarter, India extended their lead when Vivek Sagar Prasad scored from close range after being set up by Simranjeet Singh.

India secured their third penalty corner in the 41st minute but this time Amit Rohidas' try was saved by the South African goalkeeper.

India kept up the pressure and earned their fourth penalty corner in the 49th minute and Varun scored from a variation to make the scoreline 5-0 in the home team's favour.

South Africa finally had something to cheer about when they secured back-to-back penalty corners in the 53rd minute and from the second chance, Pautz deflected in Eustice's flick to reduce the margin to 5-1.

South Africa too got a last chance to pull another goal back in the form of their third penalty corner but to no effect.

India's chief coach Graham Reid was relatively satisfied with his wards performances and said the just-concluded tournament was a good outing in terms of preparation for the Tokyo Olympics.

"I think what I am pleased with is the last two matches, where it really counted. We played well. Yesterday was very good, today was good in parts. We can learn from things," he said after the victory.

"Good to practice in the heat with back-to-back matches. That's the kind of heat we will face in Tokyo."
Reid also pointed out the positives he has derived from this tournament.

"I never put an upper limit on something. We should always get better. From the point of PC conversion, all our flickers did well in this event. The great thing is we are creating opportunities. Next phase is to ensure we convert those percentages," he said.

The chief coach, however, said defence is something in which India will need to work extensively in the run up to the final Olympic qualifying event later this year and thereafter as well.

"You expect a lot of pressure in our defence. We have a defensive camp coming up in the first or second week in July. So we have a couple of good coaches coming. I am looking forward to it," he signed off.