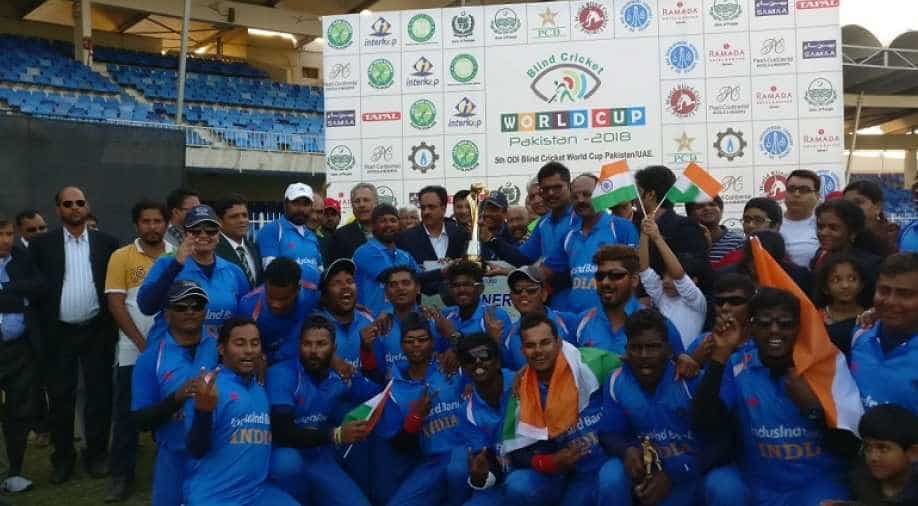 India, who are favourites to retain the title, have remained unbeaten in this tournament. Photograph:( Twitter )

India won the title for the second time.

India wins #BlindCricketWorldCup 2018 by defeating Pakistan in the final at Sharjah. pic.twitter.com/HobTZDkjFT

Pakistan, batting first, scored 308 for the loss of eight wickets with Badar Munir raising his half-century and making 57 runs for the team.

Riyasat Khan scored 48 runs with the bat while skipper Nisar Ali made 47 runs for his side.

In response, India reached the target of 309 runs at the loss of eight wickets despite losing three consecutive wickets.

Sunil Ramesh scored 93 while Ajay Reddy hammered a knock of 62.

On the occasion, Prime Minister Narendra Modi took to his Twitter handle to congratulate the other men in blue on their victory.

Congratulations to our cricket team for winning the 2018 Blind Cricket World Cup! They make the nation proud and inspire every Indian with their game as well as phenomenal attitude. True champions!

India, who are the defending champions, defeated Pakistan by seven wickets in their group match on January 13.

Pakistan made it to the final after defeating Sri Lanka by 156 runs while India beat Bangladesh by seven wickets to book their place in the final.

India, who are favourites to retain the title, have remained unbeaten in this tournament.