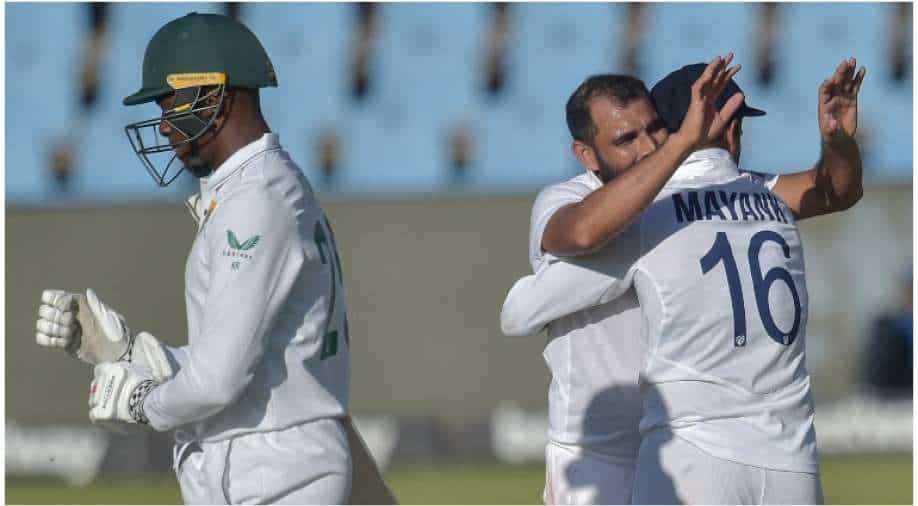 Indian pacer Mohammed Shami claimed a five-fer on Day 3 of the Centurion Test and also reached the 200-wicket club; being the third-quickest among India pacers.

After Day 2 being washed out, India and South Africa resumed the first Test on Day 3 on Tuesday (December 28). An action-packed day came to an end with 18 wickets falling during the course of the day's play as Mohammed Shami and Lungi Ngidi attained five-fers for their respective sides.

India resumed at 272-3 and quickly fell for 327. Ngidi returned with 6 for 71 but the South African bowlers' efforts got derailed as the Dean Elgar-led line-up were dismissed for a paltry 197 in the first innings, handing a mammoth 130-run lead to the Virat Kohli-led visitors at the SuperSport Park, Centurion. Shami was the chief wicket-taker for Team India, claiming an impressive 5 for 44 as he was rewarded for maintaining a disciplined line and length throughout. The pacer accounted for the wickets of Aiden Markram, Temba Bavuma and the likes to handover the advantage to India.

With his five-fer, Shami joined the 200-wicket club; becoming the fifth Indian overall and the third-quickest speedster to achieve the feat from the country.

India pacers will 200 or more wickets in Tests

After the Proteas fell for 197, India went to stumps losing the wicket of opener Mayank Agarwal as the right-hander fell for 4. Shardul Thakur was promoted up the order as KL Rahul and the fast-bowling all-rounder took India to 16/1; with an overall lead of 146. India will look to set up a target of anything over 275 as rain and thunderstorm is predicted for the final day's play.