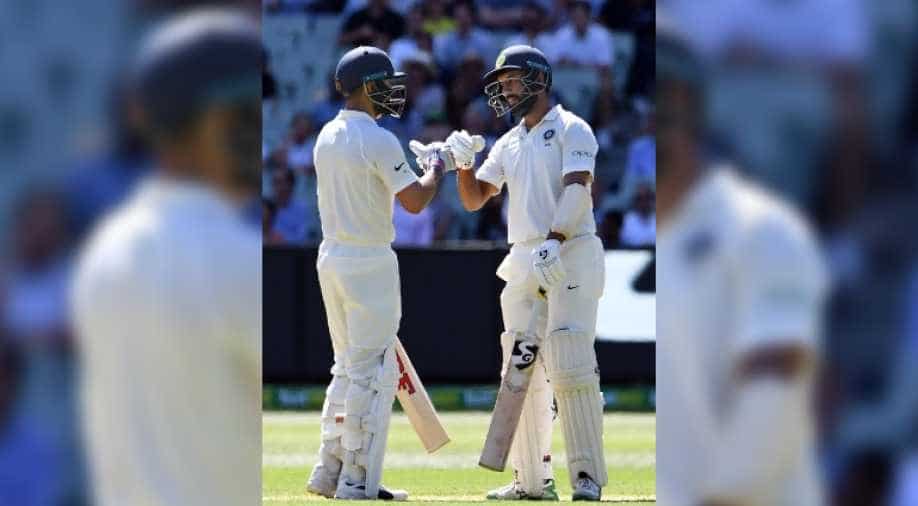 India's batsmen Cheteshwar Pujara (R) and Virat Kohli bump gloves during day one of the third cricket Test matches between Australia and India in Melbourne on December 26, 2018. Photograph:( AFP )

He lost his wicket to Nathan Lyon while trying to hit a big shot.

Mayank Agarwal rose to the occasion and hit another half-century to give India a decent start on day 1 of the fourth and final test against Australia, before losing his wicket to Nathan Lyon while trying to hit a big shot.

He departed after making a crucial 77 which includes seven boundaries and two sixes. His first fifty came in the third Test against Australia which was also his debut game.

Mayank found a perfect ally in Cheteshwar Pujara, who also slammed a brilliant fifty to keep Australia at bay. India captain Virat Kohli, however, was sent back to the pavilion after 23 runs by Josh Hazlewood.

Opener KL Rahul, who had slammed a century when he last played in Sydney Cricket Ground in 2015, was also dismissed by Hazlewood for nine.

Earlier, Virat Kohli won the toss and elected to bat in the fourth and final Test against Australia in Sydney.